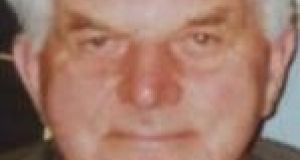 William Busher was last seen on January 4th in the Kilmore Quay area in Wexford.

Gardaí have renewed an appeal for an 89-year-old man who has been missing from Wexford since early January.

William Busher was last seen on January 4th in the Kilmore Quay area and was reported missing by family members the following day.

Mr Busher is described as being about 5ft 10in tall and of medium build with short grey hair.

It is not known what Mr Busher was wearing when he went missing but he drives a 141-WX brown Nissa Qashqai.

Gardaí are asking asking farmers and homeowners to check their land, sheds and outhouses and hotel and bed and breakfast owners to check guest lists.