Body of murdered teenager was found near her Glenageary, Dublin home 15 years ago 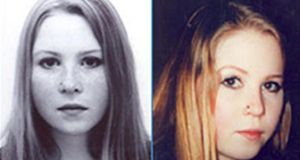 Gardaí have renewed an appeal for information on the murder of 17-year-old Raonaid Murray on the 15th anniversary of her murder. Photograph: Garda/PA Wire

Gardaí have renewed an appeal for information on the murder of Raonaid Murray on the 15th anniversary of the 17-year-old’s murder.

Murray’s body was found at 12.33am, Saturday, September 4th, less than 500 metres from her home in Glenageary, Co Dublin.

She had been out socialising with a friend in Scott’s pub in Dun Laoghaire. She made arrangements to go to a night club later and left the pub at around 11.20pm to go home and change. Her body was later found at Silchester Crescent.

The gardaí today said they remain “fully committed to the investigation into Raonaid’s murder”.

Gardaí have asked anyone with information to contact the Garda Incident Room at Dun Laoghaire Garda Station, phone 01-6665032 / 6665012 or alternatively the Garda Confidential line at 1800 666 111 or any Garda Station.

1 With Lincoln looking on, the crowd dropped to their knees as 7pm approached
2 Luke ‘Ming’ Flanagan bares his bottom half to European Parliament
3 Coronavirus: 25% of new cases arising in the community with no known link to other cases
4 Easing restrictions: What exactly will happen next Monday?
5 Sweden should have done more to combat coronavirus, health chief says
Real news has value SUBSCRIBE