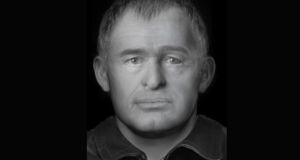 Gardaí attempting to identify a decomposed body found almost a year ago have released a digital image of what the dead man may have looked like.

The body was discovered by a man who was walking his dog in Rusheen Woods, near Barna, Co Galway, on September 27th, 2014.

Det Sgt Paudie O’Shea said all possible tests, including DNA and finger marking, were completed and then ran through Interpol’s database to try to identify the man.

He said nothing had been found that would help to identify the man, who is described as being between 30 and 40 years old, about 183cm (6ft) in height with black hair and well built.

A facial reconstruction image of what the man may have looked like has now been rendered by scientists at Dundee University to help the investigation.

“He had absolutely no identification on him,” he said. “We’re hoping the facial image will relate to people more and they might remember something.

“He had a full face, big jaw and a distinctive gap in upper front teeth.”

Det Sgt O’Shea said the man’s death was not being treated as suspicious.

“We’re doing everything possible to identify him. There’s obviously family out there somewhere,” he said.

The man was wearing a gold bracelet watch (Caravelle by Bulova), a black leather jacket, blue jeans, and blue and white Athletech runners when he was found.

“It seems like he has some connection with the US. He had a small amount of euro and sterling,” said Det Sgt O’Shea.

The man also had a black belt with a silver buckle with metal flower design studs across its length.

Det Sgt O’Shea said it seemed the man had accommodation somewhere in Ireland as he had a single key for a Yale lock, typically used in a wooden front door of eye-level height.