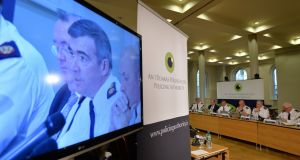 No criminal investigations were being carried out by the Garda into the sharing of thousands of intimate images online last week as no crimes had been disclosed, Garda Commissioner Drew Harris has said.

However, Mr Harris has said the Garda had not received any complaints from anyone claiming they had been victimised in any way. He said all of the photographs had been checked and none of child abuse had been uncovered.

Appearing before a meeting of the Policing Authority on Wednesday, Mr Harris was asked by authority member Vicky Conway if he could provide the “victims” of “image-based sexual abuse” with an update on the criminal investigations under way.

Mr Harris said the Garda was “very aware” of coercive control, harassment and “the problem of images being used to intimidate people, blackmail people, as a form of image-based sexual abuse”.

However, he confirmed nobody had made any complaints to the Garda arising from the images shared, which he said were on sites hosted outside the Republic.

“We’re aware of the circumstances. As yet we’ve had no actual complaints of image-based sexual abuse or coercion or harassment or such like. So there’s actually no crimes under investigation in this jurisdiction at this moment in time,” Mr Harris said.

The matter received very significant attention last week, both in the media and on social media. There were claims that thousands of women in the State had been victimised by the images being shared without their consent and that some of the images were of minors.

Also at the Policing Authority meeting on Wednesday, it emerged the Garda’s new anti-corruption unit would effectively begin day-to-day operations on Monday having been in planning stages for over a year.

Assistant Commissioner Pat Clavin, who is heading up the unit, said it would initially have about 30 staff and that it had identified a number of themes it intended to focus on from next week. These areas include gardaí possibly abusing their powers for sexual gain, using drugs and having business interests and secondary incomes. He added plans had already been progressed to purchase testing kits to test if Garda members were using drugs.