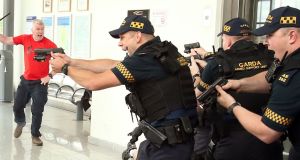 The Garda is ready to meet international and domestic terrorists with a strengthened armed response, Garda Commissioner Nóirín O’Sullivan has said.

Reaction times to major incidents are being studied more closely than ever and specialist armed units are undergoing large-scale tactical exercises, but the threat of an attack is not significant, she said.

There is no intelligence to suggest any international terror groups are planning to strike in the Republic. And while the New IRA is being closely monitored and was very active, the threat level it posed was “low”, she added.

Ms O’Sullivan was speaking after a tactical training exercise at Docklands Rail Station beside Dublin’s IFSC.

She said the Garda could not ignore attacks that had taken place in other European cities. It must prepare for a terror attack and major criminal feud incidents.

And while the threat from dissident Republicans was much more pressing for the security forces in the North, the groups were active in the Republic and absorbing a lot of Garda resources.

“Recently, on the very same day [June 3rd] the London Bridge attacks happened in the UK, we saw a seizure on Spring Garden Street [in Dublin’s north inner city] of 4kg of TNT, a very volatile explosive,” Ms O’Sullivan said.

“It was capable of making 30 under-vehicle improvised explosive devices. One of those was made up in that car and ready for deployment.”

The Garda had been so successful in catching dissidents, she said, that for the first time in the history of the State there were two Special Criminal Courts “and both are booked up until the spring of 2019”.

However, the threat from domestic and international terrorists must be kept in perspective.

“It’s really important [to say] Ireland is a very safe place. We’ve no intelligence to say that [an international attack] is going to happen here. But we have to be realistic.

“We have to look at what’s happening in other jurisdictions and we have to make sure that we’re prepared well enough to respond.”

She said the Garda was now recording its response times to a range of emergencies. Based on the times recorded to date, she was confident in the force’s ability to react quickly if a major incident occurred.

Plans had already been announced for 10 Armed Support Units nationwide. These would offer an armed response to terrorism and organised crime shooting and feud incidents.

A small number of the armed units are already operating as Regional Support Units. Others are being readied and by the end of the year will be in operation as Armed Support Units. They will be located in Cork, Galway, Ballyshannon, Dundalk, Mullingar, Waterford, Limerick, Cahir and Claremorris.

Ms O’Sullivan said the Armed Support Unit for Dublin was already operational and the Special Detective Unit, which investigates terrorism, had been augmented recently.

Friday’s training exercise – a mock international terror attack at the Docklands Rail Station close to the IFSC – had been planned since April and was the first of several scheduled for this year, Ms O’Sullivan said. Others would involve a range of security agencies, including the Defence Forces, training with the Garda. Not all would be in Dublin.

During Friday morning’s exercise two terrorists armed with a knife and machine gun “stabbed” people outside the station and “shot” people inside before taking hostages on a train at the platform. Actors played the roles of terrorists and rail passengers.

Stun grenades were used by the Garda and blank rounds of ammunition were fired by both the Garda and terrorists. The train station is only used in morning and evening rush hours and so was empty during the exercise.