‘I really have to take my hat off’, says Catherine Costello, who was involved in search for Bobby Ryan 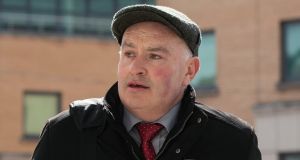 A retired policewoman who got involved in the search for murdered man Bobby Ryan has praised An Garda Síochána for its persistence throughout the case.

Patrick Quirke was sentenced to life in prison on Wednesday after being found guilty of the murder of Mr Ryan, a part-time DJ. The prosecution case said Quirke murdered Mr Ryan so he could rekindle an affair with Mary Lowry, with whom Mr Ryan had been in a relationship.

Catherine Costello, who now lives in Ireland, is a co-founder for the Searching for the Missing group. She was asked by Mr Ryan’s daughter Michelle to help in the search and went to Bansha, Co Tipperary, where she met her and his girlfriend, Mary Lowry.

She told RTÉ radio’s Today with Sean O’Rourke show that she subsequently took a call from Ms Lowry asking to meet.

“She was very different from my first meeting when she was upset, at the second meeting she was distraught, she was absolutely roaring crying, I did my level best to calm her,” said Ms Costello.

“As a result of what she told me I appreciated she was in a very deep hole. I told her that the information she had was critical and that she should go to the guards with it.

“At the first meeting she hoped that Bobby had just decided to take time out, and that he may possibly have gone off with a male friend to Lisdoonvarna just to chill, and that he’d be back. He was missing about five days at that stage.

“The second meeting was several weeks later when it obviously had dawned on her that he hadn’t gone to Lisdoonvarna, so her distress was very apparent, she now suspected that he may have met foul play.

“She then told me about her former relationship with Pat Quirke.”

The information that Ms Lowry had was “catastrophic on a social level, she had young children, the eldest only 12.”

Ms Costello said that she was concerned for Mary herself.

“If my daughter had a boyfriend who stole a key and used it to come into her house while she was at work you would be very concerned,” she said.

“This guy isn’t right, you would be telling your daughter you’d better get rid of him fairly rapidly. It’s not normal.”

She paid tribute to the gardaí­ in Tipperary, who, she said, showed “massive persistence in this case”.

“I’ve been critical in the past, but this time I really have to take my hat off. It was slow but significant, the diligence and persistence. There was some very good evidence.”

Ms Costello explained that when Mary Lowry told her about her affair with her late husband’s brother-in-law Quirke, she did not want to speak to a male guard.

Ms Costello said: “She told me that in the initial search for Bobby she met a very nice woman police officer, she had been very kind to her, that’s who she decided to go and see.

“I felt it was Mary Lowry’s actions in putting up CCTV that led to the discovery of Bobby’s body.”

“The one thing that struck me the second time I met her was that she kept praying to her late husband for guidance.”