Victim believed to have been sleeping rough in derelict building 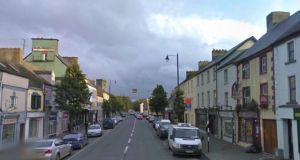 Nenagh pub fire death: the blaze broke out at a derelict building on Kenyon Street in Nenagh

Gardaí have described the death of a man in a fire at a derelict pub as a tragedy and said they are not treating it as suspicious.

Firefighters found the 47-year-old victim, who was originally from eastern Europe, in the remains of the disused premises on Kenyon Street in Nenagh, Co Tipperary, on Thursday morning. A second man who was in the building at the time of the blaze managed to escape. He was being treated at University Hospital Limerick for minor injuries.

A taxi driver alerted emergency services after seeing smoke emerging from the first floor of the building. Three tenders from Nenagh and Cloughjordan put out the fire after fighting the blaze for 12 hours.

The dead man is understood to have been sleeping rough, although it was unclear if he was recorded as homeless. Gardaí were still trying to confirm his identity and contact any relatives.

“He had little or no English, and he was living a hopeless life, moving from one disaster to another. He did live in accommodation in Nenagh at one stage, but he became homeless through his own difficulties,” said a source. “I would describe him as a poor unfortunate man who either came over to Ireland living like this or who ended up in that lifestyle.”

Breda McMahon, a local publican who lives opposite the building where the fire occurred, said: “It’s an awful shock to the community . . . Everyone is saddened. I’m sure that man has a mother and a father and a family somewhere. We’re all deeply affected by it, especially because it has happened at Christmas, when we all need love and affection.”