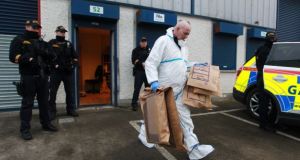 Gardaí investigating the Kinahan crime gang must today charge or release four men arrested after cash and firearms were seized in Co Dublin.

Only one of those arrested was on the premises when Garda teams moved in and raided the warehouse targeted on Tuesday where a search yielded 15 firearms.

Gardaí are working on the theory that that man, a Dubliner in his 50s, was managing the illegal activities going on there on behalf of gang leader Christy Kinahan.

Of the four suspects, two were arrested in a van near the warehouse at the time the raid got under way. And the fourth suspect still being held on Thursday night was detained at another address raided in a follow-up operation.

All four men were arrested under section 30 of the Offences Against the State Act, which allows for their detention for questioning for 72 hours.

Their periods of detention were extended on Thursday for the third 24-hour period. It means the three men detained in or near the warehouse on the Greenogue Industrial Estate near Rathcoole, Co Dublin, were due for charge or release just before 12pm on Friday.

And the 72-hour period of detention of the other man was set to expire in the hours that followed, because he was arrested later.

The man in his 50s who was on the premises when gardaí arrived has no criminal record and gardaí now suspect he had been a key figure in Ireland for the international Kinahan gang for years.

The cartel has been headed by veteran Dublin criminal Kinahan from southern Spain for most of the last 15 years. Kinahan relocated there to grow his drugs wholesale business not long after being released from prison in Dublin.

And while he had worked for many years without becoming a top priority for the Garda, which was dealing with protracted gangland feuding in Ireland up until about 2010, that has changed of late.

The gang Kinahan leads has become drawn into a bloody gun feud with the Hutch faction in Dublin, though all but one of the 11 murders to date has been carried out by the Kinahans.

That violence has seen a very significant level of Garda resources applied to bringing down the gang. And the searches and seizures of recent days that began early on Tuesday represent the latest, and most significant, in a series of strikes by the Garda against the group.

When gardaí raided the premises some of the firearms were loaded and appeared to be ready for collection while others were hidden away in vacuum-packed bags.

Cash was also found in vacuum-packed bags and it is understood an estimated €400,000 in cash was seized – most of it at a house in Co Kildare on Tuesday night.

The guns seized include nine revolvers, four semi-automatic pistols, a submachine gun and an assault rifle.

Gardaí believe the weapons that were loaded were destined for use in an imminent attack by the Kinahan gang as part of the Kinahan-Hutch feud and they suspect they were just about to be collected when the searches started.

A number of bank accounts linked to the Kinahan gang were unearthed during searches on Tuesday and Wednesday. The paperwork and other records retrieved will be closely reviewed in a bid to unpick what gardaí believe are some of the Kinahan’s financial dealings.