Gardaí make 160 arrests for drink- and drug-driving over weekend 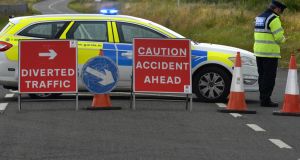 An Garda Síochána said there were 10 serious injuries suffered on the roads over the August bank holiday weekend. File photograph: Dara Mac Dónaill

Last year there were no deaths over the same weekend although an increase in traffic activity had been expected this month with more people holidaying domestically due to Covid-19’s impact on travel.

A man in his 40s and a teenager died in a crash in Glengarriff, Co Cork, a motorcyclist in his 30s died in Co Wexford, and a 94-year-old woman suffered fatal injuries in a three-car collision in Burgess, Co Cork.

In the build-up, gardaí and the Road Safety Authority (RSA) launched a major awareness campaign, appealing for safe driving with a particular focus on the dangers of intoxication.

There were 160 arrests for driving under the influence – 105 for alcohol and 55 for drugs. There were also 2,624 instances of speeding with some motorists recorded travelling more than 100km/h over the limit.

“The level of endangerment we encountered over the weekend is not acceptable,” said assistant commissioner for roads policing Paula Hilman. “Despite our best efforts to proactively engage and educate drivers, too many are still taking chances and putting people’s lives at risk.”

In the Tipperary Garda division, 11 drivers were arrested on suspicion of drug-driving.

In Cavan/Monaghan, nine people were arrested for driving under the influence of an intoxicant, including five for drug-driving.

Gardaí in Carrickmacross stopped a vehicle whose driver tested positive for cocaine and who was subsequently found to have been disqualified.

In Dublin, there were seven arrests for intoxicated driving offences at a mandatory checkpoint on the N81 which runs from the M50 to Tullow, Co Carlow.

Overall, there were 60 road traffic collisions, including eight serious cases, over the bank holiday.

In August, 2019, there were nine road deaths and the figure already this year is at three (one of the four over the bank holiday occurred following a crash on Friday, July 31st).

“Many people are on staycations in August and we urge all road users to be extra vigilant in order to avoid further road deaths and serious injury,” gardaí said.