Gardaí know identities of youths who pushed woman into canal 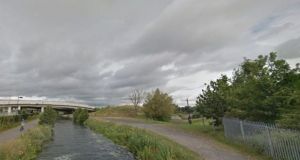 Part of the Royal Canal at Castleknock in Dublin. Photograph: Google Maps

Gardaí know the identities of the youths who allegedly racially attacked a woman on Friday and pushed her into a canal but the boys are unlikely to face criminal charges, sources say.

Xuedan (Shelly) Xiong was walking between Castleknock and Ashtown at around 7pm on Friday when she alleges she was racially abused by youths before two of them pushed her into the Royal Canal.

No arrests have been made as of Sunday afternoon but sources say gardaí have identified the two boys who pushed Ms Xiong into the water and intend speak to them in the near future.

The suspects are both under 18 and will be legally entitled to anonymity and the benefit of the Children Act.

Sources say, due to their age, it is unlikely the teens will be charged with assault and that they are instead likely to be given a caution under the juvenile liaison programme which will leave them without a criminal record.

In some circumstances, offending youths are not judged suitable for juvenile liaison due to the seriousness of the offence or a long history of offending.

However this is a high bar. Last year two teens avoided criminal charges and were instead cautioned under the juvenile liaison programme for attacking another youth with acid, leaving him with damage to his face and eyes.

A decision not to charge the teens with a criminal offence was upheld by the Director of Public Prosecutions following an appeal by the victim’s mother.

“These incidents typically end with a JLO [Juvenile Liaison Officer],” a garda said.

“We are following a very definite line of inquiry,” another source said of Friday’s attack. “We will be speaking to them very soon.”

It is understood gardaí have received a large amount of information from the public about the identity of the teens.

Most of the information stems from people who viewed the footage online. It is understood the footage was taken by another youth at the scene.

In a statement on Sunday, a garda spokesman said it is still seeking witnesses and information into what is being treated as an “alleged racially motivated” attack which occurred between Lock 11 and 12 of The Royal Canal, Dublin 15 at approximately 7.25pm on Friday evening.

“An incident occurred when a young woman was racially abused by a number of youths on the side of the canal and then the lady was pushed into the canal,” a spokesman said.