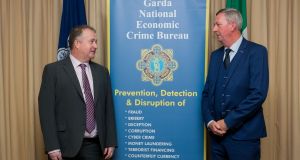 Cryptocurrency frauds and other online investment scams have increased massively since the start of the Covid-19 pandemic as more Irish people search for quick returns on their savings.

Ordinary people from every age group and every walk of life are falling victim to the scams after being tempted by legitimate looking investment websites and pop-up ads, the Garda National Economic Crime Bureau (GNECB) has warned.

Gardaí have uncovered a wide variety of online investment frauds including pyramid and ponzi schemes. The most common type of scam involves fake investment opportunities in cryptocurrencies with promises of huge returns for investors.

There has been a 61.5 per cent increase in reports of investment fraud to gardaí this year, compared to the same period last year (65 this year up from 25 last year).

According to figures released by the GNECB, the number of reports began to increase dramatically in April, shortly after lockdown measures were introduced to combat the pandemic.

Victims have lost almost €3 million so far this year with some losing several hundred thousand euro. Gardaí believe Irish people will lose about €4.5 million to scammers by year’s end.

Chief Superintendent Pat Lordan warned this is likely only the “tip of the iceberg”. Many people do not yet realise they have been scammed because they can see their money sitting in an online account, which will later turn out to be fake. Others are too embarrassed to go to gardaí or believe their investment may still come good, he said.

Gardaí outlined several reasons for the increase in such scams including low interest rates worldwide which are encouraging people to seek out riskier forms of investment.

People have also been saving more during the pandemic and are seeking ways to invest some of this money.

Detective Superintendent Michael Cryan said people are also spending more time online at home “where they feel safe.” In many cases they are working from home where they are not behind the company firewalls which would ordinarily block suspicious websites.

Sixty two per cent of victims are aged over 50 and ten per cent are over 70. Det Supt Cryan said some older people, who are perhaps less tech savvy, are seeking out investment opportunities for their retirement packages or savings.

However he warned many young people are also falling victim to the scams which often feature fake endorsements from celebrities and influencers.

Most of the scams are run from abroad meaning gardaí have little chance of catching the culprits and even less chance of recovering the money. “By the time we track down the account storing the money it is long gone,” Chief Supt Lordan said.

There are two main categories of victims, he said- those who go online looking for investment websites and come across fraudulent sites and those who are lured to such sites by a pop-up ad while browsing the internet.

The victim is encouraged to enter their contact details and is then immediately called by someone who pressures them into investing immediately.

They are often sent fake balance updates showing their investment increasing which encourages them to invest more. The scam often only becomes evident when they go to withdraw the money.

In one case from this year , victim was lured into an investment scam on Instagram. They were encouraged by the scammers to move the conversation to WhatsApp before being persuaded to go to a website which allowed users to convert money into cryptocurrency and transfer it to another account.

The victim invested €4,000 over five transactions, all of which was lost. Gardaí are still trying to track down the person who received the money.

“Remember if it sounds too good to be true then it probably is,” the GNECB warned.

• A person was browsing the internet when a fake Irish Times article popped up detailing a well-known Irish politician praising investment opportunities in cryptocurrency. They followed a link from the fake article and entered their phone number on a website. They immediately received a call from a “financial advisor” who persuaded them to hand over €3,000. It was traced to a Russian bank account.

• A woman was reading the Irish Independent website when a pop-up appeared asking for her number. She granted the scammers control of her computer and an initial €255 was drained from her account. Her bank noticed the suspicious transaction and prevented a further €5,000 being taken.

• An Irish businessperson was in contact with a man they met on the internet who persuaded them to invest in his firm. They lost a total of €120,000.

• A woman started using cryptocurrency to invest in an unregulated “CFD investment broker”. She received regular reports stating her investment was growing, causing her to invest more. By the time she realised the investment was a fraud she had lost over €370,000.