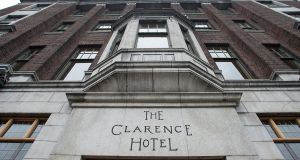 Gardaí are investigating an incident where a woman fell out of a window of the Clarence Hotel in Dublin city centre.

The 21-year-old woman was taken to St James’s Hospital on Monday, November 12th, with serious injuries, after falling from a window at around 8pm.

Gardaí attending the scene arrested one woman (23) who was questioned over the incident.

A spokeswoman for the Garda Press Office said the 23-year-old was detained, but had since been released, and a file on the case would be prepared for the Director of Public Prosecutions.

Investigations were still “ongoing” in the case, the spokeswoman said.

The Clarence Hotel on Wellington Quay, near Temple Bar, is owned by U2 lead singer Bono and guitarist The Edge.

A spokesman for the Clarence Hotel said it would not be making any comment on the matter.