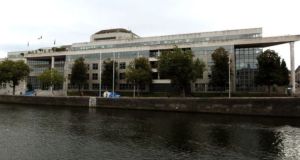 A Garda investigation into payments to criminals extorting building contractors on a Dublin City Council housing scheme is examining what, if anything, officials in the council knew about the transactions.

During a Criminal Assets Bureau (Cab) case last year the High Court was told the contractors were informed they could make payments to two men to ensure attacks on the sites in Cherry Orchard would stop and then claim back the money from the council.

More than €550,000 was paid out and the High Court ruled the money was the proceeds of crime. It gave permission to Cab to seize what remained of the cash, almost €300,000, from the men who had extorted it: Derek O’Driscoll (46), Meagan’s Lane, Crooksling, Saggart, and David Reilly (36), Croftgrove, Ballyfermot.

A Garda investigation is ongoing, separate to the now concluded Cab inquiry, and is examining if money paid out by contractors was reimbursed by the council. It is also investigating if council employees who dealt with the contractors recommended the monies be paid so the attacks would stop, or if they helped to set up the payment arrangements as the High Court was told.

A team appointed by the council last year to investigate how payments were made to the criminals was “stood down” soon after being established and a report commissioned by the Government on the matter has been with Minister for Housing Eoin Murphy since December.

Council chief executive Owen Keegan said the internal inquiry had been halted and that Mr Murphy has had a report on the matter for four months in response to question tabled by by Cllr Mannix Flynn.

In his reply, furnished to Mr Flynn on Monday, Mr Keegan said a team was established by him in October to review “the incidents in question” and systems and processes generally around the council’s management of its building sites.

However, he added that on November 9th the Government appointed Patrick Butler SC to prepare a report into the role of the council “and/or individual employees” of it in the matter.

Mr Keegan stated that the report by Mr Butler was completed and submitted to Mr Murphy on December 18th and was under consideration but that “a number of issues have to be finalised before the process will be fully completed”.

“The team appointed by the chief executive has been stood down, pending completion of the Garda investigation,” he added.

Mr Flynn said the circumstance in which Mr Keegan’s team was stood down was not clear to him and the fact had never been stated publicly before.

He said the council should have made it clear before a criminal investigation began that the alleged involvement of council personnel was involved.

“It is really important we know how money from the council ended up in the hands of gangsters,” he said.

Mr Murphy’s office did not reply to a request for comment.