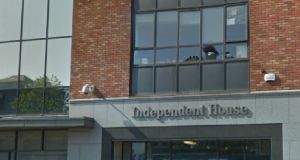 Gardaí are seeking to trace where a package containing a bottle of sulphuric acid sent to the Sunday World newspaper originated from.

A package containing a bottle labelled “sulphuric acid” was sent to the tabloid newspaper’s offices in Dublin late last month, according to a Garda spokesman.

The sealed bottle, which was addressed to a former staff member, was not opened and has been taken by gardaí for analysis.

Investigators in Store Street Garda Station are carrying out inquiries into the incident. The Sunday World is based in Independent House, on Talbot Street, Dublin 1. The newspaper is part of the Independent News and Media (INM) group.

The Sunday World reported yesterday that international policing agency Interpol were assisting gardaí in tracing the source of the package. The newspaper reported the package was sent to Dublin from Spain via Germany, through a delivery service.

A Garda spokesman said there were “no reported injuries, and inquiries are ongoing to trace the origin of the package”.

However it is understood a staff member who handled the package received burn injuries to their arm from liquid acid in the parcel alongside the sealed bottle. The employee works in the an adminstrative role at the newspaper.

Séamus Dooley, head of the National Union of Journalists (NUJ) in Ireland, said the package was “clearly designed to intimidate the journalist and the Sunday World.”

“It also serves as a reminder to media organisations to be extra vigilant and to review security measures,” he said.

“The Sunday World has a long record of investigative journalism and will not be intimidated by threats or actions of this type,” he said.