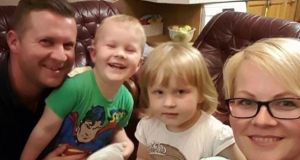 The late Mikolaj Wilk photographed with his wife Elzbieta and their two children. Photograph: Gofundme

Gardaí investigating the murder of a Polish father-of-two who was attacked by a gang of up to four masked men with machetes at his family home in Co Cork on June 10th have issued a fresh appeal for information in the case.

Mikolaj Wilk was a popular local gardener who ran his own firm having been based in Ireland for 12 years. The 35 year old lived with his wife Elzbieta and their two young children at the Bridge House in Maglin, Balincollig.

While they thanked the public for their assistance to date, gardaí said they wished to continue to appeal to taxi and hackney drivers who were working in the Maglin, Ballincollig, Ballinora and Waterfall areas on the night of the murder.

They have also expressed a desire to speak to a taxi driver who picked up three women at a pub in the Wilton area of Cork through a booking on a taxi app and drove to Waterfall, dropping two of the women along the way.

“Witnesses, or anyone who can assist with the investigation, are asked to contact Gurranabraher Garda Station on 021- 4946200, the Garda Confidential Telephone Line 1800 666 111 or any Garda Station.”

On Saturday night, Elzbieta Wilk was joined by her father and sister in law at a special remembrance mass in Ballincollig, Co Cork where Irish and Polish people formed a queue to express their solidarity with the grieving relatives.

Polish Chaplain in Cork Fr Piotr Galus said the religious representatives at the mass at St Mary and John’s included the Bishop of Cork, Dr John Buckley, Canon Ian Jonas of the United Diocese of Cork, Cloyne and Ross and local priests.

Ballicollig parish priest Fr George O’Mahony issued a renewed appeal for information in the case at the mass.

Fr Galus said the mass was very well attended and the community continued to be shocked by the brutality of the death.

“It was quite a full church. Mr Wilk’s wife was at the mass with her father and sister in law. When I was leaving the church there was still a huge queue to extend compassion and compassion to her and the family.”

Members of the Polish community previously gathered at St Augustine’s Church earlier this week to pray for Mikolaj and his family.

Fr Galus and the Bishop of Cork, Dr John Buckley, visited Elzbieta earlier this week when she was being treated for her injuries at CUH. Elzbieta required hand surgery after she suffered tendon damage. She also incurred facial and head injuries. She has since been discharged from hospital.

A not-for-profit Polish organisation in Cork, Together Razem, has offered its help to the Wilk family.

In a statement on Facebook, the centre staff said they were “shocked and saddened by the vicious machete attack on the Wilk family.”

“Mikolaj Wilk was a hardworking Polish man and his life was taken so suddenly. Our thoughts and sympathies go to the family and friends of the man who has lost his life. We are able to offer free of charge counselling services in the Polish language to the Wilk family members at our centre.”

They also urged the wider community in Cork to contact gardaí with information and to support the Go Fund Me page set up for the family: https://www.gofundme.com/help-for-mikolaj-wilk-family

Irish and Polish people alike have donated to the fund, which has reached in excess of €20,000. Mikolaj, who was known as Nick, and Elzbieta were due to celebrate their seventh wedding anniversary later this month.

A postmortem indicated that Mr Wilk died of multiple injuries including stab wounds.

No specific details of the injuries have been made public. There is no known motive for the attack. Mr Wilk had never come to the attention of gardaí and was also not known to police in his native country.