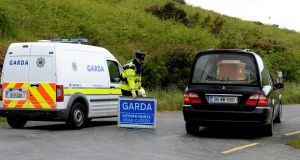 Gardaí believe a person whose remains were found in the Wicklow Mountains on Saturday evening was murdered.

The remains, understood to consist of a torso, were found close to an isolated part of the Military Road near Glencree by members of the public.

It is understood that the remains are not skeletal and were placed there in the recent past. An examination on the torso was taking place on Sunday night which gardaí believe will provide clues as to the time of death and when the remains were dumped there. It is not yet known if the deceased is male or female.

Speaking at Bray Garda station on Sunday, Supt Pat Ward said a murder investigation had yet to be officially launched but that investigators believed the victim met a violent end.

The remains were found shortly before 8pm on Saturday by two hillwalkers. They believed they had found a human torso and alerted gardaí. Officers from Bray visited the scene and concluded they were dealing with a human body part. A local doctor was called to the scene and he came to the same conclusion.

The Military Road between Glencree and the Featherbeds was still sealed off on Sunday night as gardaí searched the area for more remains or items that could provide clues.

The Garda Technical Bureau and Deputy State Pathologist Michael Curtis examined the scene on Sunday before the remains were taken to the Mater hospital in Dublin to be X-rayed. They were then taken to the pathology department in Whitehall for further examination.

“We are trying to establish a timeframe,” Supt Ward said. “We will be guided by Dr Curtis’s investigation.”

The remains are not believed to be those of convicted rapist James Nolan whose body parts have been found in several locations since his disappearance in 2011.

The site of the find is located about 1km from the Glencree Peace and Reconciliation Centre on the Dublin side. The area is popular with cyclists and hillwalkers and gardaí are appealing for witnesses who may have seen something suspicious in the last few weeks.

Gardaí believe that the suspect may return to the area in the near future to remove incriminating evidence now that part of the body has been found.

Anyone with information or who has spotted any unusual behaviour in the area is asked to contact Bray Garda station on (01) 666 5300, the Garda Confidential Line on 1800-666-111 or any Garda station.