Motorists avoided striking hounds from Meath Hunt by pulling in 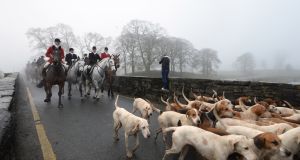 Gardaí are investigating an incident in which four dogs from a hunting party were killed after they were stuck by cars on the M3 motorway in Co Meath.

A spokeswoman for the force said gardaí in Dunshaughlin were investigating the incident that occurred at Skreen, Dunshaughlin on at approximately 3.20pm on Monday. It’s understood the dogs strayed onto the stretch of road during a nearby hunt.

“It involved a number of cars and up to four dogs that were on the road,” she said. “All four dogs were killed. No one was injured in the collision.”

Dash cam footage shows that some cars were forced to pull in at the side of the road to avoid hitting the dogs. A vehicle was also damaged.

The dogs belonged to an organisation called Meath Hunt, which said the incident was a “once-off”.

“The dogs are managed by staff who have been doing this for many years. We’re very proud of what we do and what we can do across the country for pest control.

“Nothing like this has happened in 15 years. Hunters have never had an issue with the motorway. We have a lot of foot marshals out there and hunt staff on the ground to avoid collisions like this.

“Unfortunately, the hounds just got through very quickly and they were on the motorway before anyone could do anything about it.”

The Irish Council against Blood Sports claimed the incident was “a clear breach” of dog laws and that it caused “endangerment to motorists”.

“We contend also that the Meath Hunt is in breach of the Animal Health & Welfare Act, Section 11(1) in that their animals were in a place that clearly, and in the event tragically, threatened their health and welfare,” it said in a statement.

“The Irish Council against Blood Sports is now renewing its call on the Government to outlaw hunting with packs of hounds which causes terrible suffering to animals and also poses a major threat to public safety.”