Gardaí investigate the death of baby boy in Co Kerry 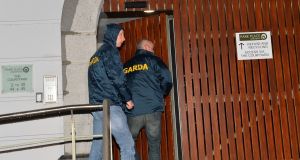 Gardaí are investigating the suspicious death of an 11-month-old boy following an incident at an apartment complex in Killarney, Co Kerry on Sunday night.

A man in his 30s was taken to Kerry University Hospital in Tralee with serious injuries and received medical attention, gardaí confirmed.

A detailed examination of the scene of the incident was carried out on Sunday night and the area was sealed off for forensic examination.

Gardaí and ambulance services were called to the apartment at Park Place, off Upper High Street, in the town at about 6pm on Sunday.

They were responding to an emergency call from the mother of the boy, who had returned to the apartment.

The apartment block is about 300m from Killarney Garda station.

The baby boy was treated by emergency services personnel but was pronounced dead a short time later.

The body remained at the scene, which was preserved for technical examination.

A man in his 30s, who is understood to be from eastern Europe, was taken from the scene by ambulance to hospital in Tralee.

The nature of his injuries is not clear, but they are not believed to be life-threatening.

The Assistant State Pathologist, Margot Bolster, was informed and arrived in Co Kerry to carry out a preliminary examination, with a full postmortem due in Tralee hospital on Monday.

Sources say that while gardaí are keeping an open mind in the investigation, they are not looking for anyone else in connection with the incident.

Gardaí are waiting to interview the man who was hospitalised and also plan to talk to others who were in the apartment block at the time.

The spokesman from the Garda press office said it was investigating all the circumstances surrounding the death of the boy.

No further information was available “at this time” but investigations were ongoing.