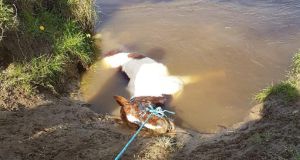 About eight people spent a number of hours trying to pull the pony from the water but by the time they managed to get the animal out river he was too weak to survive.

Gardaí­ and local authority officials are investigating the death of a pony that was found in the river Nore in Kilkenny city on Sunday afternoon.

It is believed that the animal was left in the river, close to the Linear Park Walk along the Nore, by its owners on Sunday and there are claims that it was forced into the river before being abandoned.

Gardaí have confirmed they are investigating the incident while Kilkenny County Council officials discussed it on Monday morning. A postmortem is due to be carried out while an examination is taking place to establish if the pony was microchipped and, if so, can his owners be traced.

About eight people spent a number of hours trying to pull the pony from the water, but by the time they managed to get the animal out he was too weak to survive.

Local woman Sinéad Gibbons, who was out walking with her mother and helped to take the animal from the river described what happened as “horrific”.

“We came across a man who was screaming at me and my mother to come and help. He was trying to hold the horse’s head out of the water.”

She had earlier seen three people with a pony near the water and assumed that they were about to wash him. “We said hello and they said hello and we kept walking.”

It was about 20 minutes later that she came across the man who was trying to keep the pony’s head above water.

“The horse was alive, is the best way to describe it, but he was very faint,” she said. “I hopped in the water and tried to get his head out of the water.”

After some time several others came to help and they eventually managed to get the animal out of the river. “He was twitching and his mouth was moving so he was still alive at this stage.”

She reported the matter to the local Garda station and also tried to ring the county council. In the meantime, a vet from a local practice arrived “but by the time she had come down, the horse was gone,” Ms Gibbons said.

“God love him, he was a fighter . . . The vet’s opinion was that there were fresh marks on the inside of his leg. We presumed that maybe an animal had attacked the horse. They [the owners] probably presumed he might go lame.”

“Watching an animal die is never an easy thing to do. We felt so hopeless. It was fairly horrific. I think it’s only hitting me today, the severity of it all.”