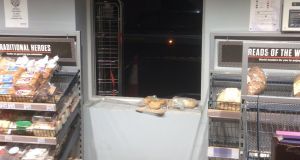 A picture of a broken window at the Centra store in Stepaside after a robbery on Friday. Photograph: Shane Ross via Twitter

Gardaí in south Dublin are investigating a break-in at shop in Stepaside in the early hours of Friday. It is the third burglary of a shop in the area in just over a week, locals said.

Owner of the Centra Stepaside store Des Kennedy said he was shaken after the incident.

He said gardaí telephoned him shortly after 4am to say his shop had been broken into and they were at the scene when he got there.

“I live about eight minutes from the shop,” Mr Kennedy said.

He said CCTV footage showed what appeared to be two men breaking in through a side window. However, they were “well covered-up”.

“They pushed some shelving away from the window so the place was in a bit of a mess,” Mr Kennedy said.

A sum of money was taken from three tills and a quantity of cigarettes was also stolen, he added.

Outside Des Kennedy's Stepaside shop after 4am break-in last night. Typically Des reacted " At least no one in the community was hurt" pic.twitter.com/1kTaT0oYkM

He understood the raiders had left the scene in a vehicle and that gardaí had given chase but did not catch them.

Mr Kennedy, who employs 12 staff at the Centra store, said he had been held up on his way from the shop about eight years ago. “But that was another story,” he said.

He has run the shop for 50 years and took over the business from his mother, Elizabeth Kennedy, who had run the shop across the road before that.

Mr Kennedy said the burglary was the third in the area in recent days and he believed the lack of a Garda station in the area was a factor.

A Garda spokesman said gardaí were investigating a burglary at about 4.14am this morning at a retail premises in Stepaside, Dublin 18.

“A window was smashed and a number of items were taken. No arrests have been made at this stage,” the spokesman added.

Stepaside Garda station was one of 139 stations that closed between 2012 and 2013 and its re-opening was a key demand by Minister for Transport Shane Ross for entering government in 2016.

About €1.5 million will be spent on refurbishing Stepaside station while five other stations will be allocated a maximum of €1 million between them, the Public Accounts Committee heard last month.

Maurice Buckley, chair of the Office of Public Works (OPW), confirmed Stepaside is expected to reopen next June, as part of an overall €2.5 million works package.

Minister for Culture, Heritage and the Gaeltacht Josepha Madigan and TD for Dublin-Rathdown tweeted that she was “saddened and angry to see that another shop has been broken into in Stepaside overnight”.

“This time it was Des Kennedy’s Centra shop at 4am. My heart goes out to him. Such despicable acts of thuggery in a lovely village like this is disturbing,” she added.

Mr Ross tweeted a picture from the scene and said: “Typically Des reacted ‘At least no one in the community was hurt’.”