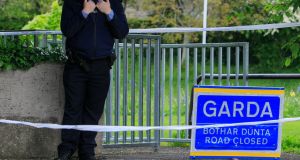 A Garda at the scene of a fatal stabbing in Finsbury Park, Dundrum, Dublin. Photo: Gareth Chaney Collins

Gardaí have begun an investigation into the fourth stabbing attack in recent days, with the latest victim suffering wounds to his face.

The incident, in the early hours of Tuesday morning, occurred in Co Kildare. It follows the unrelated fatal stabbing of Azzam Raguragui (18) in Dundrum, south Dublin, last Friday.

In the latest attack, a man in his 40s suffered what gardaí believe were stab wounds to the face. Gardaí believe the incident was a group assault, with the victim attacked by a number of men, one of whom inflicted the stab wounds.

“Gardaí are investigating a serious assault that occurred on Main St, Leixlip Co Kildare, on May 14th shortly after midnight,” a Garda statement said.

“A man in his 40s was allegedly assaulted by a number of other persons. The injured party received apparent stab wounds to his face. He was taken to James Connolly Memorial Hospital. No arrests have been made and investigations are ongoing.”

Another man was injured in a stabbing on Sunday night at Armore Avenue, Knocknaheeny, Cork city. He was wounded several times though his injuries were not life threatening.

Also on Sunday evening, a boy aged 13 years suffered apparent stab wounds to his arm on Ballygall Road, Finglas, north Dublin, at about 7.45pm. The boy was expected to make a full recovery.

A suspect has been identified by gardaí for last Friday’s fatal attack. Investigations are ongoing into the incidents in Cork city and north Dublin, though no arrests had been made as of Tuesday night.