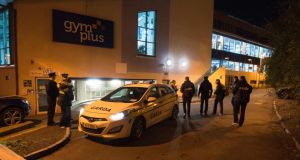 The scene of a double shooting beside a gym in the Applewood area of Swords on Thursday night. Photograph: Dave Meehan

Gardaí are investigating a possible drugs link to last night’s fatal shooting outside a gym in a residential area of north Dublin.

Zach Parker (23) was killed and another man was seriously injured outside Gym Plus in the small Applewood area of Swords at about 7.30pm. The other man in his 20s who was also shot in the attack was undergoing treatment in Beaumont Hospital .

Parker, from Jugback Lane, Swords, had avoided a prison sentence last April after he was caught in possession of a consignment of cocaine.

The court was told on February 4th, 2017 his car was searched by gardaí and cocaine worth €2,900 was discovered. Swords District Court was told Parker had “chipped in” with friends to raise the money to buy the drugs. It was also suggested he turned to drugs when his grandmother became terminally ill.

As a result, the court was told, he ran up debts and lost his job as a barber though he was “fundamentally a person of good character”. He was ordered to complete 240 hours of community service in lieu of three months in jail and pay €1,000 to charity.

Last night a number of distraught people arrived at the scene, visibly upset.

One man said the gym was opposite a crèche where parents would have been collecting children up until 7pm.

“There is no value on life anymore,” said a nearby resident who asked only to be identified as Mick.

Reacting to the news, local Labour Party councillor Duncan Smith said the scene was one of “total shock”.

“People are shocked, there are hands on heads, and open mouths, its eerily silent,” he said. “I know it’s always said, but you just don’t expect it to happen here, this is a young, vibrant area.”

The gym is located in a residential area, across the road from a row of houses, and opposite a crèche.

The Applewood area is about 17 years old and is made up of a warren of roads and homes. Locals said it was mainly young families and home to a large Eastern European community.