Gardaí investigate cause of fire in historic Dublin building 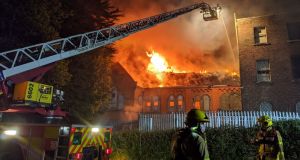 An Garda Síochána are investigating whether a large fire in a historic north Co Dublin building on Monday night was started deliberately.

Several Dublin Fire Brigade units were called to a blaze at Belcamp College, a former school located off the Malahide road in Balgriffin.

More than 20 firefighters from units in Kilbarrack and North Strand battled the fire for several hours, using water tankers and a turntable ladder. The units had been called out to the fire shortly before 9pm on Monday.

Strong winds blew large amounts of smoke over the surrounding area as the blaze was brought under control, and there were no injuries.

Investigating gardaí were at the scene on Tuesday morning seeking to establish if the fire was started deliberately.

Firefighters remained at the scene on Tuesday morning. “Although the fire is under control, small pockets of fire are still alight,” Dublin Fire Brigade tweeted. “For this reason, we advise for local residents to keep windows and door closed to prevent smoke entering your home. Please stay away from the area.”

Belcamp was built in the 18th century and was designed by the architect James Hoban of Kilkenny who also designed the White House in Washington.

Actor Brendan Gleeson was a teacher at the former school, and its notable past pupils include golfer Philip Walton, and famous Kilkenny hurler Frank Cummins.

The school was run by the Oblate religious order and closed in 2004.

There have been several fires started in the derelict building over the last decade, most recently in 2016.