Lampers understood to have killed animals in Conna in east Cork 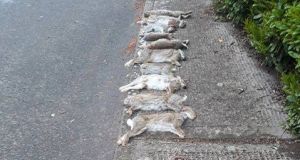 The dead rabbits were left on a path in Conna, Co Cork. Photograph: Conna Community Council/Facebook

A Garda investigation is under way after 13 dead rabbits were placed on a pathway in a Co Cork village on Tuesday.

Members of the public are asked to report anyone who was seen trespassing or acting suspiciously in Conna in east Cork on Monday night or Tuesday morning.

It is understood the animals were killed by lampers who were disturbed as they attempted to take away their haul.

Lamping is the night time shooting or killing of animals with the aid of strong spotlights to transfix wild animals in a powerful beam.

A photograph of the dead rabbits was posted online by Cork’s Red FM after they spotted the image on the Conna Community Council page.

A spokesperson for Blackwater Animal Rescue in Fermoy appealed to the public for assistance in tracking down the culprits.

“It’s very disturbing and I hope whoever did this awful abuse of harmless creatures will be found and prosecuted for animal cruelty.

“We work closely with Fermoy gardaí and I am glad they are investigating this. There must be CCTV in the area that can help in tracking down the people who did this. We will do everything we can to help gardaí in their investigations”.

The Conna Community Council page stated that the crime was “absolutely despicable”.

In an update to the page the council said that gardaí attributed the killing of the rabbits to lampers.

“Gardaí called out and are satisfied that lampers paid us a visit, got disturbed and left their haul behind. It seems they come from the city at night and illegally enter lands to dazzle rabbits and hares to catch.”

The council has asked locals to be alert in relation to strange cars or vans spotted down lanes at night.

Anyone with information is asked to contact Fermoy Garda station on 025 82100.