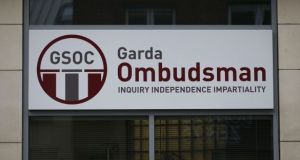 The incident has been referred to the Garda Síochána Ombudsman Commission (Gsoc). Photograph: Nick Bradshaw

Gardaí are examining whether the incident in which an Alsatian dog was shot and a man received minor injuries in Co Longford last night was linked to the discovery of a €500,000 ‘chop shop’ factory four days earlier.

A man in his late 20s, who is well known to gardaí, sustained a wound to his lower leg during the incident at Ferriskill, between Granard and Edgeworthstown shortly before 5pm yesterday evening.

It is understood he was shot with a garda issued Sig Sauer handgun.

He was taken to Mullingar’s Midland Regional Hospital for what have been described as non- life threatening injuries.

Gardaí have confirmed officers were carrying out an “ongoing investigation” in the area when, during the course of a confrontation, an official garda firearm was discharged.

The incident occurred during an altercation on a country road between an armed plain clothes garda and several members of one family.

Senior garda chiefs have stopped short of commenting on the circumstances which led up to the incident, though one line of investigation being considered is if the episode was linked to the discovery of up to €500,000 worth of machinery from a large industrial lock up premises last Thursday.

Gsoc investigators will examine the referral before deciding whether to launch a full investigation into the incident.

The human cost of Covid-19: new HSE figures reveal the toll on care homes 05:59
Contracts signed for road projects, government formation talks told 05:55
Encouraging health behaviours to tackle the pandemic 01:01
Where’s the beef? Outdated data leads to uncertainty on way forward 01:00
Circus in crisis: Even if the tent goes up, the problems won’t go away 00:58