Gardaí identify suspects after fatal hit and run in Dublin 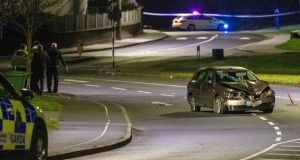 Gardaí examine the scene at the junction of Ballinclea Road and Avondale Road, in Killiney in south Co Dublin. Photograph: Damien Storan.

Gardaí believe they know the identities of at least two men who were in a getaway car that was driven on to a pavement in south Dublin before fatally injuring a woman who was out walking with a friend.

She worked as a special-needs assistant at Our Lady of Good Counsel Girls National School in Cabinteely.

One of the young men being sought in connection with the incident has a conviction for violently assaulting a disabled person after taunting the victim about their disability.

The same suspect, who is in his early 20s, has also served prison sentences for smash-and-grab robberies like the one the men were fleeing from when they hit Ms McGovern and her friend just before 9.20pm.

In the moments before the fatal collision two men threatened staff at a Centra store on Barnhill Road, Dalkey. They stole money before being driven away at speed by another man in a waiting car.

The fleeing driver appeared to lose control of the vehicle at the junction of Ballinclea Road and Avondale Road, Killiney, where the women were struck.

Ms McGovern was taken from the scene by ambulance to St Vincent’s hospital, where she was later pronounced dead. Her friend (51) who was injured also works as a special-needs assistant. She was in a stable condition last night.

The scene of the fatal crash, which is about 1km from the shop where the robbery took place, was sealed off immediately after gardaí arrived and underwent an extensive crash scene investigation on Wednesday.

A woman who lives near the scene described the incident as “terrifying”.

“Nothing like this has ever happened here before,” she said. “It’s terrifying to think you could just be out walking and something like that could happen. My sympathies are with the woman’s family.”

The crashed car was also being forensically examined and gardaí were hopeful it would yield forensic evidence that could link the suspects to the crime.

As well as hitting Ms McGovern and her friend, the car collided with road furniture and was so extensively damaged that the men were forced to abandon it and flee on foot.

They remained at large last night but gardaí believe they know who two of them are. However, they were wearing masks or had scarves over their faces when they robbed the Centra shop.

The men are believed to be linked to a group of violent offenders with a long history of robbery and assaults in the south Co Dublin area.

Gardaí from Dún Laoghaire are investigating and searches were carried out last night and a number of properties were put under surveillance.