Gardaí identify suspect for fatal stabbing of teen in Dundrum 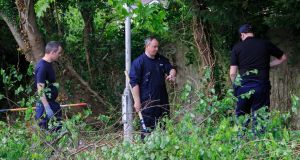 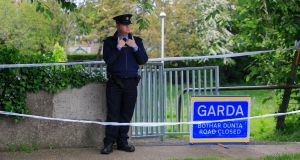 Gardaí investigating the fatal stabbing of Azzam Raguragui (18) in a south Dublin park were following a definite line of inquiry and believe they know who inflicted the fatal wound.

Mr Raguragui, who had no criminal record, was stabbed to death in Finsbury Park, Dundrum, last Friday.

Garda sources stressed while they were keeping an open mind, an intense inquiry over the weekend had yielded strong lines of investigation.

And one line of investigation was focused on a south Dublin teenager as the suspect for the stabbing. Detectives have already been in contact with the suspect and his family.

While no arrests had been made as of late last night, one teenager who was present when Mr Raguragui was stabbed has been aiding the Garda’s inquiry.

That witness went to the Garda at a south Dublin station on Saturday afternoon and spent the remainder of the day and Sunday being interviewed about what he says happened.

He has not been arrested but was instead being spoken to for the purposes of gathering as much information as possible.

The suspect is closely associated with men from south Dublin who have engaged in serious violence in the past, including assaulting members of the Garda. On one occasion when a drug search was attempted on one of the men, serious violence ensued.

Investigating detectives believe some of the teenagers present at about 8.10pm on Friday when Mr Raguragui, who was from the locality, was stabbed were using their phones to video what they believed was a fight rather than a knife attack.

Gardaí are hopeful that an examination of phones and mobile phone records will add to the evidence available in the case. Finsbury Park, where the killing occurred, is between Dundrum and Churchtown.

It appears groups of teenagers had gathered in the park when a melee occurred and the victim, who had earlier been at Friday prayers, was stabbed to death.

Gardaí are aware of groups of local teenagers previously fighting in rival factions close to the scene of Friday’s attack and also of some teenage boys coming from other parts of south Dublin for group fights.

The deceased teenager was Irish and was Muslim. His family is of North African origin. However, in a statement, gardaí said they did not believe there was a racial motive to his killing.

Garda sources said groups of teenagers were present when the fatal attack occurred and that the ethnicity of both groups was mixed.

Mr Raguragui was treated at the scene by emergency services and then taken to St James’s Hospital, where he was pronounced dead a short time later.

A postmortem was carried out by deputy State pathologist Dr Linda Mulligan. While the results were not being released publicly, it was believed to show the victim was fatally stabbed.

On Saturday, Dundrum-based Rosemount Mulvey FC held a minute’s silence before their match, which was played close to the crime scene. It said it had just won its football league and dedicated the win to Mr Raguragui and his family, adding the “whole community is in mourning”.

Muslim organisation, the Irish Sufi Foundation, said Mr Raguragui was “a kind, courteous, respectful and cheerful young man who always had a smile on his face”.

“He was bright, talented and ambitious with aspirations to become a successful entrepreneur,” it added in a statement.