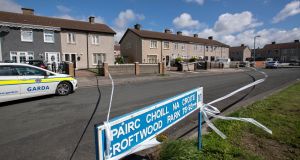 Thomas McCarthy was shot dead when he opened the door of his elderly mother’s house in Croftwood Park, Ballyfermot. Photograph: Colin Keegan/Collins Dublin

A young Ballyfermot man has been identified by gardaí as a leading suspect in the murder of Thomas McCarthy who was shot dead in his mother’s home on Monday.

The suspect, who is in his 20s, lived at one stage near the McCarthy family home in Croftwood Park. He is believed to have murdered Mr McCarthy (55) as part of a dispute involving a family member of the victim.

The suspect has several previous convictions, and is believed to have ties to organised crime. However, most of the suspected gunman’s convictions are for less serious offences, including a long list of car thefts.

Gardaí believe Mr McCarthy returned to Ireland from the United Kingdom, where he lives with his wife and children, in response to an attack on a female family member by another male.

It is thought Mr McCarthy had made it known he intended to confront this male, and that this may have led to his murder. However, the man who attacked his female relative is not believed by gardaí to have been the killer.

The investigation is at an early stage and gardaí are keeping an open mind, sources stress. Investigators have not ruled out the possibility Mr McCarthy was killed in a case of mistaken identity, or that his killer acted alone.

The suspect, who no longer lives in Ballyfermot, is closely aligned with a local organised criminal who has been involved in drug dealing and extortion rackets and has been recently targeted by the Criminal Assets Bureau.

Mr McCarthy was shot at least three times when he opened the front door to a masked gunman at 11am on Monday. He managed to retreat back inside, but the gunman followed and shot him several more times.

The victim’s house is still occupied by Mr McCarthy’s elderly mother. She was in the house at the time of the murder, along with some of the dead man’s siblings.

The victim was pronounced dead a short time later despite efforts to resuscitate him. Neighbours described hearing up to 10 shots being fired in rapid succession.

The gunman escaped in a Ford Fiesta which was found burnt out nearby. He then got into a Skoda Octavia and drove to Monksfield Walk in Clondalkin. This car was also burnt out with the suspect fleeing on foot.

Gardaí believe he then got into a waiting Toyota Avensis, 10-D-123251. This car was spotted on CCTV between 10.57am and 11.06am at Woodford Lawns, a five minutes’ walk from Monksfield Walk.

The Avensis was found burnt out on Peamount Road, a quiet country road located about 15 minutes away, in Newcastle, Co Dublin.

“Gardaí are appealing to anyone who may have observed this vehicle between the hours of 10am and 9.30pm yesterday, Monday 27th, July 2020, or who may have any information in relation to this vehicle, to contact them at Ballyfermot Garda Station on 01 666 7200, the Garda Confidential Line 1800 666 111 or any Garda Station,” the gardaí said in a statement.