Most violations related to no food being served with alcohol 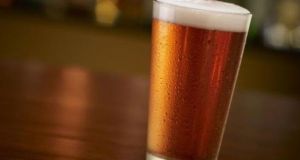 Pubs are being inspected under Operation Navigation which started on July 3rd. Since then a total of 80 premises have been found in breach of regulations or guidelines. Photograph: iStock

In most instances the alleged breaches related to pubs not serving food with alcohol, the Garda said.

“The majority of these cases continue to refer to no evidence of food being served or consumed and no evidence of receipts to show that food had been sold,” it said in a statement.

Under current regulations pubs must serve a meal costing at least €9 to customers drinking alcohol. Other regulations include a 105 minute limit on visits and minimum one metre social distancing provisions.

Most regulations are not penal provisions, meaning pub owners in breach will not face criminal charges. However it will be open to gardaí to object to licence-renewals for non-compliant owners.

Pubs are being inspected under Operation Navigation which started on July 3rd. Since then a total of 80 premises have been found in breach of regulations or guidelines.

“An Garda Síochána is delighted to see a continued high level of compliance by licensed premises to the Public Health Regulations. However there are still a minority of licensed premises that are failing to adhere to the regulations,” said Deputy Commissioner for Policing and Security John Twomey.

“In such circumstances gardaí will continue its graduated policing response based on its tradition of policing by consent and I would appeal to publicans to comply in all circumstances to help stop the spread of Covid-19.”

A decision on the full re-opening of pubs, without the requirement to serve food, is expected next week. Full reopenings were originally supposed to take place on July 20th but this was delayed to August 10th following an uptick in cases of Covid-19.

The Government has signalled pubs may not reopen fully on August 10th if conditions are not right.

1 ‘It was pitch black’ - Rescued teenager describes night afloat with her cousin in Galway Bay
2 Schools urged not to demand clean uniforms each day
3 A million trees, including 400,000 oaks, to be destroyed this week
4 Inside the O’Brien Fine Foods factory in lockdown Kildare
5 Aaron Brady, the man who said with pride he was a cop killer
Real news has value SUBSCRIBE