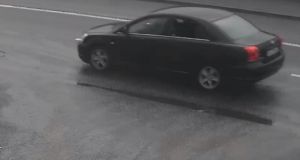 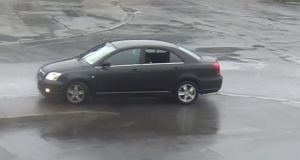 Gardaí are trying to track the movements of a 04 black Toyota Avensis that the men who murdered Derek Coakley Hutch used to escape.

The suspected killers switched to the black Toyota from their original getaway vehicle, and gardaí believe the second vehicle was bought days before the shooting.

Derek Coakley Hutch was shot and killed on January 20th while sitting in a car at Bridgeview halting site, near Cloverhill Prison in west Dublin.

The attackers left the halting site in a VW Golf, which had a 05-CE-1675 registration. The car was found shortly after the murder by gardaí, burnt out nearby at Crag Avenue, Clondalkin, Dublin 22.

From there the killers transferred into the black Toyota Avensis (registration number 04-D-72956). They abandoned this at Snowdrop Walk, Darndale, Dublin 17, where it was found, on fire, by gardaí, three hours after Coakley Hutch had been killed.

Gardaí have released images of the second car in the hope of gaining information about the killers’ identities or movements before and immediately after the murder.

The car was bought from its previous owner just days before the murder on January 16th. Gardaí are hopeful a witness may have seen or captured a recording of the car by chance in the days leading up to the killing on or in the hours after the murder.

Gardaí in Lucan Garda station have appealed for anyone with information to come forward, or to make contact through the Garda Confidential Line on 1800 666 111.

Gardaí believe the murder was linked to the Hutch-Kinahan feud, of which Derek Coakley Hutch was the 14th victim to be killed since it began more than two years ago.

On Wednesday Derek Coakley Hutch’s funeral was held in the north inner city in a church on Sean McDermott Street.

The night before the funeral, Jason Molyneux, a close friend of Derek Coakley Hutch, was shot and killed on the North Strand.