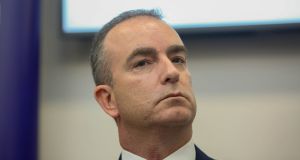 Det Insp Mark O’Neill during a media briefing at Kevin Street Garda station in Dublin following the sentencing of Boy A and Boy B for the murder of 14-year-old Anastasia Kriégel in May 2018.

It is unfortunate that it has not been possible to establish why two boys murdered teenager Ana Kriégel, the investigating officer in charge of the case has said.

Det Insp Mark O’ Neill was speaking at a Garda press conference after the sentencing of the two boys, known only as Boy A and Boy B due to their age.

Asked if it was difficult not to have been able to establish why the boys had murdered Ana, Det Insp O’Neill replied: “We certainly set out to establish the why. Unfortunately, that wasn’t possible, or hasn’t been possible so far.

“But I think our job is to gather the evidence and present it to the court and hope then that the court will establish the why. Unfortunately that hasn’t been entirely possible as yet.”

Det Insp O’Neill was speaking at press briefing along with Chief Supt Lorraine Wheatley and Supt John Gordon, who were all involved in the investigation.

Chief Supt Wheatley said it was evident to the Garda team that Ana had been “full of life and full of joy” and that her death was a huge loss to her family.

Supt Gordon said special arrangements were put in place during the investigation in response to the young age of the boys, so as to preserve their anonymity and rights. He said these also mitigated any lines of defence that might have been opened at the trial in terms of oppression of the teenagers.

He said hired cars and black bin bags were used, rather than unmarked Garda cars and standard evidence bags, when the boys’ homes were visited. The safety of the boys and their families was of “huge concern”, he added.

Two Garda stations were cleared out before the boys were brought separately to them, and special arrangements were put in place so that the boys did not have to sleep in cells and so a parent could be with each boy at all times.

They said special care was taken when interviewing the boys, with trained officers doing meticulous planning for a number of days beforehand.

Supt Gordon said the outcome highlighted how it was not only adults that can be suspects in such cases. “It was not something we anticipated,” he said.

Asked if the case had had an effect on the investigating officers, Supt Gordon nodded and said yes.