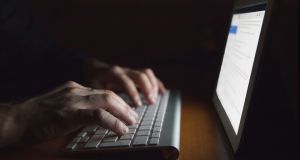 Thousands of explicit images, including of Irish women, are being examined by gardaí in a bid to determine if a criminal investigation is needed. File photograph: Getty Images

Thousands of explicit images, including of Irish women, that have been shared online in recent days are being examined by gardaí in a bid to determine if a criminal investigation is needed.

The images have been shared on online messaging forums, including one forum established so users can share explicit content that people, mainly women, have sold to subscribers on sites such as OnlyFans.

Depending on where the people who gathered and shared the images are based, and where the platforms on which the images were shared are hosted, an international investigation may be required, gardaí say.

The images are likely to have come from a variety of sources, including shares between consenting adults on social media platforms and messaging apps, with no money exchanged.

Some images, gardaí said, may have been gathered by hacking sites where explicit content was bought and sold with the consent of both parties, but which has now been shared much more widely without consent.

Describing those involved in sharing explicit content without consent as “degenerates”, Labour TD Duncan Smith said: “It is scummy, it is the lowest, most intrusive act one human being can commit against another.”

Replying to queries from The Irish Times on the images, Garda Headquarters said Assistant Commissioner John O’Driscoll, who is head of Garda efforts against organised and serious crime, has commenced “probative enquiries”.

During a Dáil debate on Thursday, Mr Smith said Labour Party legislation on online harassment will be back before the Oireachtas justice committee next month.

Sinn Féin leader Mary Lou McDonald described the progress of the legislation as “glacial” even though government approval for it had been given 18 months ago.

Rise TD Paul Murphy pointed to an online petition calling for immediate action to criminalise image-based sex abuse and said that 25,000 people had signed it.

Social Democrats TD Holly Cairns said that “where consent is not present the law must step in”. She said the Government should “protect women from what we all know is a crime but today is still not considered one”.

Offering help to anyone who has been affected, Rape Crisis Network Ireland (RCNI) said such image sharing is “never okay; it is never harmless and very shortly it will be a criminal offence in Ireland”.