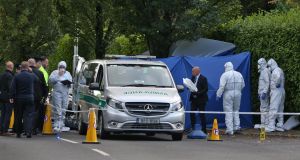 A man stabbed to death on a street in south Co Dublin has been named locally as 31-year-old married father Derek Reddin.

Gardaí are examining CCTV footage of the Dublin man’s killing, which occurred during a street altercation involving four men in Loughlinstown in the early hours of Tuesday.

Gardaí believe Reddin and a man he was with knew the two men who attacked them in the incident, and that there had been bad feeling between them prior to the attack.

Reddin, of Watson Drive, Killiney, was known to gardaí but was not regarded as a gangland figure. He died just after midnight on Loughlinstown Drive after being stabbed.

Gardaí believe the deceased was walking up the street with a friend close to the junction with Cherry Court, a short distance behind two other men walking in the same direction.

It appears the two men ahead then stepped into bushes or a front garden, where they lay in wait for Reddin and the man he was with and ambushed them. During the altercation Reddin was stabbed in the chest and as he fell to the ground the other two men ran from the scene.

The deceased’s associate alerted the emergency services. Paramedics and armed and uniform gardaí rushed to the scene, but Reddin was pronounced dead on the street.

The area was sealed off and the 31-year-old’s remains were left at the cordoned-off crime scene overnight. A preliminary examination of the body took place at the scene before it was removed for a full postmortem, which was expected to confirm Reddin died from a stab wound.

Garda sources said the investigation into his death was progressing and two men were arrested in the aftermath of the killing. They are suspects in the case and detectives believe a private CCTV system on a house close to the crime scene will provide valuable evidence.

The two detained men, aged in their 30s, were being questioned under section 4 of the Criminal Justice Act, 1984, at Shankill Garda station.

Reddin worked as a volunteer for the group You’re Not Alone, which assists people sleeping on the streets of Dublin. A short statement from the group said it was deeply saddened to hear of his killing. “Due to the devastating news we woke up to this morning [that] one of the young members of our group died last night, we are shocked and hurt at his loss.”

Gardaí are appealing for witnesses and those who were in the vicinity of Loughlinstown Drive between 11.30pm and 12.15am to come forward. They also asked motorists with relevant dash-cam footage to make it available.

Four years ago Reddin was jailed for three months for lashing out at and assaulting gardaí who had called to his house to arrest him.

He asked gardaí to return an hour later because he did not want to be arrested in front of his children. When gardaí declined Reddin became violent. He swung his arms at them and scratched the face of one garda as he resisted arrest. When he was handcuffed in the back of a Garda car after being subdued he spat in the face of one garda.

During a sentencing hearing at Dún Laoghaire District Court for that matter in September 2015, the court was told Reddin was enrolled in a horticulture course and he had no drink or drug problems. He also had a conviction for violent disorder and was given a two-year suspended sentence for that while in his late 20s.