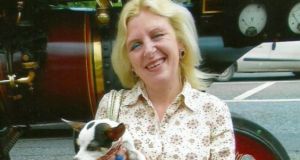 Gardaí have made a decision to end their search for missing woman, Tina Satchwell, at Mitchel’s Wood in Castlemartyr, Co Cork. Photograph: Irish Examiner

Gardaí have made a decision to end their search for missing woman, Tina Satchwell, at Mitchel’s Wood in Castlemartyr, Co Cork following an intensive and painstaking combing of the forty acre woodland area over the last twelve days.

Gardaí have thanked the public for their patience and say that the site will be closed off until notice.

They have also repeated their appeal for information on Ms Satchwell (45) who disappeared from her home in Youghal this time last year.

“Gardaí have renewed their appeal for anyone who may have information in relation to Tina’s disappearance to contact the incident room at Midleton Garda Station at 021 4621550 or the Garda Confidential Telephone Line on 1800 666111.”

Gardaí have also expressed their appreciation to the Defence forces, and other specialist services who assisted in the search. It is understood that fragments of clothing uncovered from the site in Castlemartyr, are being sent to the State Laboratory purely on a precautionary basis.

The search was commenced after gardaí received information from “a credible source.”

Ms Satchwell’s husband, Richard Satchwell, has given a number of television and radio interviews in recent weeks.

In an interview with the Neil Prendeville show on Cork’s Red FM earlier this week Mr Satchwell said that the media was devoid of feeling in relation to the case.

“I know I am in the papers a lot but I am not speaking to the papers. Personally I think they are mentally incapable of printing stuff the way it is put to them. The phone is constantly going. Last week I would say I got more calls than the national call centre.”

When asked by Mr Prendeville if he had a criminal record, Mr Satchwell said he had spent a month in jail at an unspecified time for social welfare fraud.

“I was working away claiming social welfare. As regards being in jail I think I would sooner be in jail then where I am now. I was there for a month in Cork. I was in prison over Christmas and New Year. Tina didn’t come to see me. I asked her not to as it wasn’t the type of environment I would want her to be in. We did speak every evening. I never denied to anybody that I have been in prison.”

Mr Satchwell said that his wife was a “great woman” and he “didn’t have a bad word to say about her.” When asked about previous interviews where he claimed she hit him he said that Ms Satchwell had had a “flash temper” but that there was no intent.

“She would be crying and apologising. There was no intent. The most I have ever done is hold her in my arms tightly until she calmed down.

Mr Satchwell stressed that he was living in hope and that his dream was that she would return home completely unharmed.

“I have had stuff said to me that people have gone missing for a lot longer than a year and turned up. I live in hope. I would be a emotional wreck (if a discovery was made in the woods.) I wouldn’t last six months. They are thoughts I try not to think.

“I get up some mornings and I sit downstairs and just do nothing for hours. If it wasn’t for looking after the dogs and for changing the parrots food what have I got? It is tough. I am not denying that nightly Ruby the chihuahua is licking tears off my face. All I can do is stay at home and wait for the phone to ring. And hope.”

He refuted suggestions that he was a controlling or overprotective husband saying that Ms Satchwell was “always out and about on her own.”

“Tina is not the type of personality to let anybody tell her what to do or control her. It is just not her. Often if I was out and about and I seen something in a shop window and I knew it would be Tina’s style it wouldn’t matter how sexy I would buy it.”

Ms Satchwell is originally from Fermoy in Co Cork, and is described as 5ft 6in tall, of medium build with blonde shoulder-length hair and blue eyes. The first anniversary of her disappearance is on Tuesday.

Following her disappearance gardaí carried out a full forensic examination of her property. They have also examined her mobile phone records and bank accounts to see if there has been any activity since her disappearance.

Since her disappearance, members of the Garda Water Unit have carried out a series of dives just off the quays in Youghal. The North Cork Garda Divisional Search team also joined with an army search team from Collins Barracks in Cork to comb scrubland on Golf Links Road in Youghal.

In January gardaí ruled out any link between her disappearance and the discovery of two suitcases near her home four months later.

Tina Satchwell was reported missing from her home in in Youghal on March 24th, 2017 by her husband, who said she failed to come home four days earlier.

In July of last year Mr Satchwell contacted gardaí to say he had found two suitcases which looked like ones belonging to Ms Satchwell at a clothes bank in the Tesco carpark in Youghal.

The luggage was sent to the Forensic Science Ireland laboratory for examination. Following DNA analysis detectives are now satisfied that they did not belong to Ms Satchwell and are not linked to her or her disappearance.