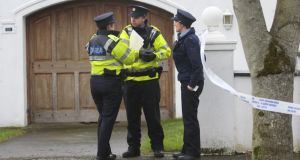 Members of the Garda at the scene of the killing on Beechpark Avenue, Castleknock, Dublin. Photograph: Gareth Chaney Collins

Gardai who responded to a 999 call suggesting a murder had been committed at the house in Castleknock, west Dublin, where Tom O’Gorman lived where “deeply shocked” at the scene they found on arrival, senior sources have said.

The main suspect in the case, who made the call, had come to Ireland 2½ years ago and had been working in customer relations in the IT field with a company based in Dublin’s south inner city.

Neither he nor Mr O’Gorman had been drinking or taking drugs on Saturday night into Sunday morning and the murder investigation has thus far found no evidence of any propensity to violence on his part in the past.

However, gardaí who attended found a gruesome scene. “The members who walked into the scene will probably need counselling,” said one source.

The killing is by far the most violent in the bloody period that has marked the start of the year, with gardaí opening investigations into seven unrelated murders in the past 12 days in which the victims had been beaten, stabbed or shot.

However, unlike the killing of Mr O’Gorman, alcohol was a factor in most of those cases.

Mr O’Gorman worked as a researcher for the Iona Institute, a Dublin-based Catholic advocacy group that promotes the place of marriage and religion in society.

The group is headed by well known social commentator David Quinn, who last night expressed the group’s “total shock and deep sorrow” at what he called his colleague’s “terrible and untimely” death.

“Tom was a friend as well as a work colleague to us all,” he said.

“Tom had been working as a researcher at the Iona Institute since its launch seven years ago.

“Most of us knew him from before then, in some cases all the way back to his days at UCD.

“He was a fond and dear friend and we will all miss him. We extend our deepest commiserations to his family and above all to his sister and brother, Catherine and Paul.”

As well as being a minister of the Eucharist at Our Lady Mother of the Church in Castleknock, Mr O’Gorman was also involved in lay Catholic groups and had worked on the campaign opposing the introduction of abortion legislation.

He held a BA and MLitt in history from UCD and a diploma in legal studies from Dublin Institute of Technology. He was a former journalist with The Voice Today.

Those who knew him described him as an “extremely bright” man who was passionate about his beliefs but remained “mild mannered”. He was a non-drinker.

‘“Even when he was debating back in UCD, he wouldn’t be the type of guy to make his point by screaming in your face,” said one former student who knew him.

“He would have the smart argument, the well thought out point.”