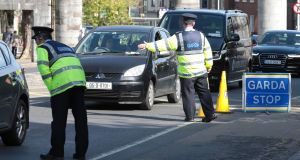 High-visibility Garda operations to police the movement restrictions will run from Tuesday and over the May bank holiday weekend until next Monday. Photograph: Collins

Gardaí dealt with a large increase in house parties and social gatherings over the weekend as concern grows over public complacency regarding the Covid-19 movement restrictions.

Official figures are not yet available but anecdotal evidence from gardaí across the country suggests a significant increase in people gathering together in homes, back gardens and on the streets of residential areas.

Gardaí in the capital received dozens of reports of parties. In Dublin Metropolitan Region (DMR) North members received reports of about 15 gatherings between Friday and Sunday, most of which dispersed without incident, sources say.

There is also increasing anger in Donegal and other Border counties than Northern Ireland residents travelling in the Republic are not subject to the movement restrictions.

However a garda based in Donegal said the problem is being overstated. “There are problems over the Border from major urban centres like Derry but elsewhere in the west of the county we’re not seeing much. I’d say about 5 per cent of the holiday homes are occupied. And those that are occupied are occupied by older people who, in fairness, do spend a lot of time here.

A second stage of Operation Fanacht, the high-visibility Garda operation to police the movement restrictions, is to begin on Tuesday and will run over the May bank holiday weekend until next Monday. It will see 2,500 gardaí deployed at any one time to ensure people are only engaging in necessary travel.

“When we last ran Operation Fanacht there was a high level of compliance from the public. It is vital that we see that again,” Deputy Garda Commissioner John Twomey said.

“This is a critical week for the country. If we all work together, we can help save the lives of our family, friends, neighbours and colleagues.”

Later on Tuesday the Garda will also release figures for the number of arrests made under the Covid-19 legislation. It is expected the figures will show a large increase on the 34 people who had been arrested as of last Tuesday.

Garda sources said, in contrast to the first few weeks of restrictions, most arrests are now not being made at checkpoints.

“People at checkpoints have their excuses ready now. They know to say ‘I’m going to see granny’ or ‘I’m going to the shops’. And we have very little way of checking,” said a garda in the north west.

More arrests are now occurring at parties and at social gatherings, many of which took place on residential streets in Dublin over the weekend and involved large amounts of alcohol. Recent figures show a massive increase in off-license sales since the lockdown began.

Dublin Lord Mayor Tom Brabazon said there was a “party fever” in Dublin on Saturday night and that revellers were taking the lives of their elderly neighbours “with a pinch of salt”.

The trend is not just confined to Dublin. Gardaí in areas such as Sligo Town, Limerick and Letterkenny also reported increased numbers of public order arrests over the weekend of people who refused to comply with Garda orders.

A Sligo garda said most people are “very compliant” but that there is growing frustrating that some sectors of society are perceived as being “allowed to ignore the guidelines”.

Meanwhile, there has been a large reduction in visits to isolated beauty spots in the face of increased Garda monitoring of such locations. But there has been a visible increase of visitors to many parks and beaches, particularly by families.

A Garda helicopter spent much of the weekend over central Dublin watching hundreds of walkers in the Phoenix Park and surrounding areas. Sources said the vast majority were social distancing.