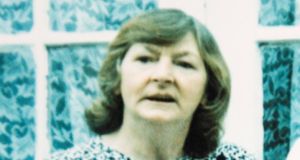 Gardaí were on Monday continuing to search the Limerick home of a murdered pensioner in a bid to establish how she died.

Officers were granted an extra 48 hours by a judge on Monday to continue to designate Rosie Hanrahan’s bungalow at New Road, Thomondgate, a crime scene. A heavy Garda presence remained at the scene.

The body of the 78-year-old widow was discovered by her sister Evelyn and Evelyn’s husband Jim Kenny last on Friday afternoon. It is believed she was killed during a break-in at her home.

Gardaí upgraded their investigation from a “suspicious death” to “murder” last Sunday after a postmortem by the deputy State pathologist Dr Michael Curtis revealed she died violently. Gardaí have not released the autopsy report for “operational reasons”.

Supt Derek Smart, who is leading the murder inquiry, did not comment on reports Ms Hanrahan may have been strangled. On Monday neighbours left floral tributes outside her front door.

Gardaí have also sealed off areas of wasteland around Ms Hanrahan’s home. The rear garden of the house stretches backwards to the banks of the river Shannon. Garda sources said they “cannot rule in or out” whether the person or persons involved in the pensioner’s murder might have used a boat as protective cover to access the rear of her home, where it is reported the break-in may have occurred.

However, while it is also understood gardaí did not find any visible tracks in the mud banks leading up to the rear of Ms Hanrahan’s home, they are following all lines of inquiry.

Gardaí are also studying CCTV footage from security cameras in the area, and from local businesses and homes.

No arrests have yet been made in the case. Supt Smart appealed for the community to pass on any information it has which may lead to arrests. Anyone with information is asked to contact investigating gardaí on 061-212400.

Neighbours said her murder has sent fear and shock through the community.

A next door neighbour and friend, Patricia Hayes, said she was devastated she would never see the popular pensioner again.

“I’m so sorry I didn’t hear anything next door. It’s so hard to believe Rose is gone. When you see [things like this] on the news you think to yourself, ‘god help those people’, but when it comes to your own neighbourhood it’s devastating.”

Andrew O’Halloran, a father of six who has been living in the area for the past 25 years, said he was horrified.

“I hope they get whoever done it to her, to be honest with you. I always met her at Mass. She was a church-going lady who never bothered anyone. She was a beautiful lady. It’s terrible sad what they did to her. She’s going to be missed terribly.”