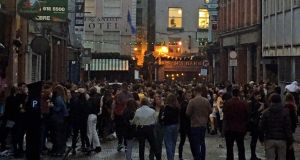 The criticism by the Association of Garda Sergeants and Inspectors (AGSI) emerges at a time of growing concern over groups congregating on the street to socialise, especially in Dublin. Photograph: Gaillot et Gray/PA Wire

Garda members were “confused” about how they should police the reopening of pubs and they were forced to depend on the media asking questions to clarify their role during the Covid-19 policing operation, the Garda’s middle managers have said.

Ten days after the reopening of pubs, the Association of Garda Sergeants and Inspectors (AGSI) said its members still did not know if policing that reopening should be done under liquor licensing laws or health regulations.

The criticism by the sergeants and inspectors emerges at a time of growing concern over groups congregating on the street to socialise, especially in Dublin. Gardaí have been directed to inspect pubs but have no power to take any immediate action, such as closing a pub, during inspections.

The AGSI said the Covid-19 policing operation had become much harder since restrictions had been eased.

She said a survey the association had carried out of its members provided vital information for the Garda from a “lessons learned” perspective.

“We were left without adequate guidance and training and relied on the media to ask questions about how gardaí­ would police Covid-19 regulations,” she said.

“The initial guidance for policing experienced an unacceptable delay. Confusion still reigns on whether it is liquor licensing laws or health regulations that are to be enforced by our members.

“Until there is a vaccine we will have to live with the virus and policing restrictions may become a feature of our work in the short term,” she said, adding a possible second wave of the virus was of real concern.

The survey found strong support for the 12-hour shifts introduced during the pandemic, with many AGSI members keen the shift pattern be retained. Furthermore, sergeants and inspectors overwhelmingly expressed a desire for controversial spit hoods to be retained after the pandemic had passed.

The hoods are mesh coverings made available to gardaí to place over the heads of suspects to prevent them spitting. The Policing Authority has repeatedly cautioned against the hoods being retained without a review being carried out first.

The AGSI member survey was carried out in mid-June, at which point Garda members had been working the pandemic 12-hour shifts for 12 weeks, with 52 per cent of the association’s 2,285 members replying via email.

The findings have been released to coincide with an AGSI national executive meeting in Portlaoise, Co Laois.

AGSI members believed there was “a greater sense of community policing and connectedness to the public during the emergency”. Public interaction and the public’s response were both “deemed highly positive”, with satisfaction rates of over 90 per cent in that regard.

However, there was “a sense that Garda management did not make the welfare of members a priority” and a call for an improvement in communication from senior management.

Sergeants and inspectors said “their knowledge of the emergency regulations was poor in the early days due to a lack of clear guidelines on implementation”.

Some 94 per cent of sergeants and inspectors said Garda members should have access to priority testing for Covid-19. Some 67 per cent believed the emergency policing regulations “were not adequately explained or informed to them by Garda management at the beginning” of the pandemic.