Gardaí ‘confident’ Trevor Deely will be found as dig continues 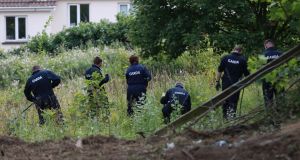 Gardaí searching for the remains of missing man Trevor Deely are set to begin “targeted digs” on the three-acre site in Chapelizod, Dublin this week.

The investigation, which is set to enter its fourth week, has reached a “critical” point, senior gardaí have said.

The 22-year-old was last seen on December 8th, 2000 when he vanished near Haddington Road in Dublin’s south inner city.

Gardaí have said they are prepared to continue searching the site for the next month if necessary, after already working on the dig since August 9th.

It is understood they are confident that they can begin targeting key locations on the site now that dense undergrowth has been removed.

The site in west Dublin has been cleared of trees and other vegetation to allow extensive excavation to begin with specialist equipment.

“The past few weeks has been a difficult time for them as they anxiously wait for answers. We are prepared to continue this search for the next month if necessary,” a senior source told The Irish Times.

Gardaí are working off information suggesting Mr Deely was shot dead by a known criminal that he had a chance encounter with in Dublin’s south inner city.

Hopes of a breakthrough in the case were raised when gardaí recovered a gun in the first week of the search but sources have downplayed the significance of this being connected to Mr Deely’s case.

The man identified as the suspect was active in drug dealing and armed robbery and living off the earnings of prostitution at the time.

In April gardaí published enhanced CCTV images showing him conversing with an unidentified man during his last known movements.

The search currently under way for Mr Deely’s remains is the most significant development in the case since his disappearance 16 years ago.