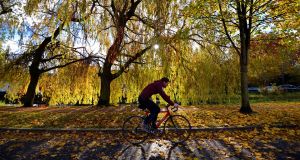 A cyclist is pictured along the Grand Canal in Dublin. Gardaí have increased their presence along the canal in west Dublin following a recent spate of attacks on cyclists and the thefts of their bicycles. Photograph: Eric Luke

Gardaí are conducting “high visibility beats” along the Grand Canal in west Dublin following a recent spate of attacks on cyclists.

Cycling campaigners have warned about safety on the canal path since it opened almost 10 years ago. However, violent attacks and thefts by gangs of youths, some armed with metal bars, have recently increased.

Two cyclists were attacked in separate incidents in the last week by teenage gangs on the Bluebell section of the path, west of Inchicore and south of Ballyfermot. Both said they were assaulted with metal bars. In one case an electric bicycle was stolen.

The incidents happened close to one of several gates along the canal route where cyclists are obliged to dismount.

Colm Ryder, of the Dublin Cycling Campaign, said the organisation has long warned of the danger posed by these gates.

“Since the cyclepath opened we have argued against the use of these gates that force cyclists to dismount,” he said. “They were installed to prevent motor vehicles, including motor bikes from getting through, as a safety measure. The irony is they have made cyclists less safe.”

Mr Ryder said alternative gate designs, which allow cyclists to remain in the saddle but are spaced in such a way as to prohibit motorbike access, are in use on other greenways.