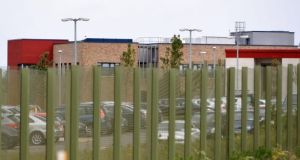 Gardaí were called to deal with an incident at the Oberstown Youth Detention Centre earlier this week, the director of the centre has said.

Pat Bergin said procedures were initiated to manage two separate “situations” over the last number of days. He released a statement through the Department of Children and Youth Affairs on Friday.

Gardaí were called for assistance due to the “perceived level of risk” on one occasion, but both incidents were resolved successfully according to Mr Bergin who thanked staff and gardaí for their handling of the issues.

He added that management at Oberstown are not in a position to comment further as the incidents are currently the subject of Garda investigations.

The incidents are the latest in a string of disturbances at the north Dublin facility over the last year.

A major fire was sparked on the roof of the centre last August after detained youths climbed onto it during a protest.

Overcrowding of residents has long been an issue at Oberstown, and management have previously come in for criticism from health and social services watchdogs for the practice of placing youths into solitary confinement when other solutions are possible.

The centre, which is not a prison but rather seeks to provide a secure environment to young people sentenced by the courts, has also had issues with staff unrest, with workers complaining of difficult conditions caused by understaffing and attacks by residents.