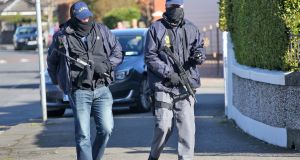 Gardaí who raided the homes of suspected major drugs dealers were forced to use hydraulic equipment to break through armoured front and rear doors.

In some cases armoured doors were in place with internal locking mechanisms used in industrial safes to secure them in 14 places.

“They had seven barrels on each side of the door, much the same way a door in a bank vault would lock,” said one source.

The armoured doors in one of the houses raided in Crumlin, south Dublin, are not offered for sale in Ireland and had been imported from Italy, according to Garda sources.

Some of the houses also had bullet-proof windows and all had been fitted with CCTV systems to monitor the outside of the properties from all angles.

Those targeted in the raids spearheaded by the Criminal Assets Bureau are close associates of David Byrne (33), Crumlin, who was shot dead in a gun attack at the Regency Hotel, Drumcondra, on Friday, February 5th, by a group of men dressed in mock Garda Swat-style uniforms and armed with handguns and AK47s.

When David Byrne’s funeral took place 10 days after his murder, his funeral was the scene of a display of wealth – including the hiring of 12 Mercedes limousines – that caused public disquiet.

Some estimates in the media suggest very high levels of spending on the funeral, including up to €15,000 on his US-style coffin.

However, sources said receipts for the funeral found yesterday showed sections of the media had “grossly overestimated” the costs.

Nineteen premises were searched yesterday, including the homes of six men who were close to Byrne.

Gardaí also searched the offices of six accountants and solicitors, from which data and documents relating to the gang members’ property transactions and business dealings were taken away for closer scrutiny.

A total of 28 cars were seized from the car garage and from outside houses in Crumlin, including luxury models such as Mercedes, Maserati and Lexus. One vehicle taken away was a Mercedes AMG valued at in excess of €100,000.

A Defender 4X4 was confiscated as well as a dune buggy vehicle and six motorcycles, including a Kawasaki motorbike used by professional road race riders and valued in the region of €35,000.

Gardaí also found about €100,000 in cash and took an expensive engagement ring from the fiancée of one of the men targeted, on the basis it was suspected to be the proceeds of crime.

A total of 10 Rolex and Breitling watches, valued at about €10,000 each, were also taken by the gardaí, and a historical soccer match betting slip for €38,000.

However, it was unclear whether that was a fake or genuine.

“We’re looking for ill-gotten gains,” said Assistant Commissioner Derek Byrne of the raids that took place from dawn and involved 60 Garda members and lasted all day.

“That may manifest itself in terms of vehicles or houses or cash or bank accounts. It’s a long, complex issue and it’s a long, drawn-out process for the Criminal Assets Bureau.”