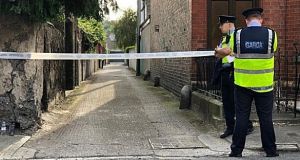 Gardaí on the scene at a laneway off Madison Road in Kilmainham, Dublin 8, where the man was found dead. Photograph: Ronan McGreevy/The Irish Times

Gardaí believe a 16-year-old boy beat a homeless man to death “with his bare fists” after stealing his mobile phone.

The victim, a Romanian man in his 40s, was found dead in the early hours of Monday morning in a laneway in Kilmainham, Dublin 8. He had been living in Ireland for several years and was known to homeless services.

The teenage suspect, who lives in central Dublin, has been arrested by gardaí and remains in custody.

The youth was arrested after his friend went to gardaí and informed them he had witnessed the fatal assault.

Investigators believe the teenager punched and kicked the man to death after the victim challenged him for stealing his phone.

“We don’t think there was any weapon involved. It was done with his bare hands,” said a source.

Gardaí are “reasonably certain” they have identified the victim and are trying to track down his family in eastern Europe to inform them of the death, said a source.

“He would have availed of our services most nights of the week,” said Tony Walsh of Feed the Homeless. “He was a very respectful man. Very polite. It was very sad to hear the news this morning.”

Gardaí are appealing for witnesses, particularly anyone who was in the Madison Lane area between the hours of 11pm and 2am, to come forward.

There has been a spike in homeless deaths in Ireland this year, despite fewer numbers sleeping on the streets during the height of the coronavirus pandemic. Thirty-two homeless people have died so far in 2020, including 10 deaths in July alone.

Pharmacist suspended from practising over risk to public health and safety 12:49
Gardaí seize €4 million in cash from organised crime group 12:38
Multi-million Anglo write-offs may be impossible to investigate, commission says 12:06
Dr Tony Holohan expected to return to his post next week 11:46
How one couple’s weekend away resulted in 30 Covid-19 cases 11:18