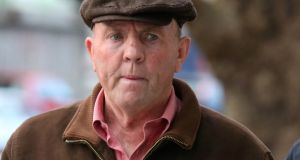 Thomas “Slab” Murphy was found guilty of not paying income tax for nine years. Murphy was remanded on continuing bail until February 12th next year, when he will be sentenced. Photograph: Collins

Gardaí are fearful of a split within Sinn Féin-IRA should Thomas “Slab” Murphy be jailed for tax evasion in the New Year following his conviction last week.

The decision by the Garda to pursue Murphy and of the DPP to approve charges against him and recommend the non-jury Special Criminal Court for his trial has incensed Murphy and those close to him.

Gardaí believe the faction loyal to Murphy in the borderlands of north Louth and into south Armagh is already at odds with Sinn Féin-IRA in Belfast loyal to Gerry Adams.

The growing rift, which has the potential to split the movement and damage it electorally, is the reason why Mr Adams, Deputy First Minister Martin McGuinness and other party figures have publicly supported Murphy and criticised his conviction.

The borderlands group has not only been angered by the fact Murphy has been tried and convicted, but that this has happened at a time when Sinn Féin has given its full support to the launch of a Garda-PSNI taskforce in recent days.

The taskforce will seek to tackle criminality such as fuel-laundering and various types of smuggling - the crimes that funded the Provisional IRA’s terror campaign. Many of those close to Murphy around his base in Hackballscross are still involved in such activities.

Gardaí fear that one man close to Murphy, also based in north Louth, wields sufficient influence to cause a split in that section of Sinn Féin-IRA that has committed to the peace process.

The man, who socialises regularly in north Dundalk with a group of like-minded hardliners, is close to men who control a large section of cross-Border crime and whose activities look set to be the target of the cross-Border taskforce.

Security sources believe neither the man, who is middle-aged and also has legitimate business interests, nor Murphy would force a split with a view to returning to a terror campaign.

However, they believe support for Adams would be compromised and that a long-term split within Sinn Féin-IRA would greatly weaken it, including its electoral machine.

“What you are talking about is the first major split in mainstream republicanism that has been unified in committing to and following the peace process,” a source said.

“This would mean that Adams and Sinn Féin would no longer control ‘peace process republicanism’, for want of a better phrase.”

Another source with intimate knowledge of policing and the republican movement along the Border agreed. “You have a group that ‘Slab’ would be linked to who see him on the TV being humiliated walking in and out of court every day,” the source said.

A senior Garda source pointed out that Murphy had managed to evade gardaí in the past when they simply wanted to arrest him.

Having secured his place in folklore for evading the criminal justice system in that way, his conviction in court represented a significant “loss of face”.

“When [the Criminal Assets Bureau] went after him he never engaged with them at all; they never had him in the same room as their people,” said one source.

“So having managed that during the Troubles and in the years after - the fact he is now through the courts like a common criminal, as they would see it, is the failing of their political leaders.”

1 Coronavirus: Almost 60 new cases recorded in Italy as two die
2 Archbishop: Sex abuse of women by L’Arche founder ‘reprehensible’
3 Ryanair’s Michael O’Leary under fire for comments on Muslim men
4 The view from Clondalkin: If Sinn Féin don’t get in, ‘there will be marches’
5 Drug dealer loses codes for €53.6m bitcoin accounts
Real news has value SUBSCRIBE