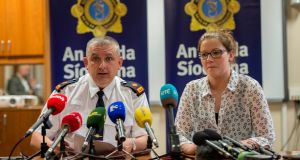 Supt Peter Duff and Garda Joanne Grogan at Tallaght Garda station during a briefing on the disappearance of Philip Cairns in 1986. Photograph: Brenda Fitzsimons/The Irish Times. 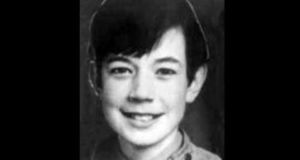 Philip Cairns was last seen on the Ballyroan Road, Rathfarnham, Dublin on Thursday, October 23rd, 1986. He was aged 13.

Gardaí investigating the disappearance of Philip Cairns 30 years ago believe his schoolbag may hold the key to solving the case, despite the death of chief suspect Eamon Cooke.

They are also trying to establish if Cooke lured the boy from the area where he lived in Rathfarnham, south Dublin, to the Inchicore studio of pirate radio station Radio Dublin, which he owned.

Detectives working on the case say they believe a number of people who were children at the time the 13-year-old vanished on October 23rd, 1986, have information about the schoolbag - found six days after Philip disappeared - that they have never disclosed.

Garda sources said it is believed a number of children were forced, possibly by Cooke, to leave the bag in the laneway.

Supt Peter Duff has urged them to come forward and disclose what they can in the hope of giving closure to the Cairns family.

“We believe there are people out there who have specific information about the disappearance of Philip Cairns. That information may lead us to that conclusion,” he said.

“From our inquiries, I believe there are people who were young at the time who may have information in relation to Philip’s schoolbag who, for whatever reason, did not come forward.

“I am conscious that with the passage of time [and] of change of circumstances that these people may now been in a position to assist,” Supt Duff said.

“This may be playing on their minds and I would ask that these people would now come forward. I can reassure them that they would be treated sensitively and discreetly with a view to assisting the Cairns family and An Garda Síochána.

“For the sake of Mrs Cairns and her family, who have been suffering for 30 years, it is important that we bring this investigation to a conclusion.”

Last week it emerged a woman, who was aged nine at the time Philip disappeared, had come forward and named Cooke as his killer. She initially contacted gardaí following an appeal for information in 2011,

A convicted paedophile, Cooke was aged 79 when he died earlier this month in a north Dublin hospice.

The woman said Cooke had struck Philip with an implement in the studios of Radio Dublin and he had died and his body was disposed of at an unknown location.

Gardaí are trying to establish the veracity of these claims, but say aspects of the woman’s story have been confirmed and they are treating her claims very seriously.

Gardaí have taken DNA samples from the schoolbag. They are now trying to establish who else had knowledge of the bag being left there and what information they may be able to provide. The bag was dry despite rain earlier that day, indicating it had been dumped.

“We are anxious to hear from anyone who may have knowledge about how this schoolbag came to be in the laneway,” he said.

“[They] may have seen it being put there or . . . may have observed it there at any time.”

Supt Duff said while a considerable amount of time - up to five years - had elapsed between the new witness contacting the Garda and making a statement, she had been very brave.

“She was a very young child at the time, I think we must remember that,” he said.

“I’d commend her for having the bravery, even after the passage of time, to come forward and say she had information.

“It took some time for the person, with the assistance of the gardaí in Rathfarnham, to be able to provide specific information to us, which was provided earlier this year.

Some 160 lines of inquiry had been opened since the woman gave the statement in late April and early May.

Supt Duff said he could not confirm whether that strand of the investigation was focused on the area around the Hellfire Club in the Dublin Mountains.

Philip was last seen leaving his home on Ballyroan Road in Rathfarnham at about 1.30pm, on Thursday, October 23rd, 1986, as he began his journey on foot back to Coláiste Éanna after lunch.

Despite extensive searches and numerous appeals for information, no trace of him has been found, apart from the canvas schoolbag .