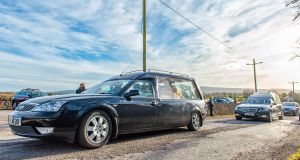 The funeral of Tadg O’Sullivan and son Diarmuid was held in Castlemagner, Co Cork on Friday. Photograph: Michael Mac Sweeney/Provision

Gardaí investigating a murder-suicide which left three members of the same family dead in a row over inheritance believe the killers deliberately chose to allow the woman at the centre of the row to survive the tragedy.

Gardaí believe following postmortems on the bodies of Tadg O’Sullivan (59) and his sons, Mark (26) and Diarmuid (23), and preliminary ballistic tests that Mr O’Sullivan snr and Diarmuid shot Mark in his bedroom in their family farmhouse at Raheen, Kanturk at around 6.40am on Monday.

7 ‘A very nice baby with beautiful fair skin ... It was like they were selling a doll’

11 Luke O’Neill: Scientists have delivered against Covid-19. Now the politicians need to

13 Brexit red tape: ‘If nothing changes, Ireland will be closed’

17 Trump prepares to leave for Florida before Biden inauguration

19 Q&A: Covid-19 new variants in Ireland - everything you need to know

21 Is paying someone to clean your house the last word in middle-class privilege?

22 Church ‘more complicit than most’ in mother & baby scandal - McAleese

26 Maureen Gaffney: The land of the mother and baby homes

27 Miriam Lord: Why did the secretary general cross the road? Because he’s worth it

28 Netflix has spent millions on its films, so why are they so mediocre?

31 Infertility treatment: When will free IVF be introduced in Ireland?

34 No, you can’t use the bathroom, Jared and Ivanka tell their Secret Service agents

36 What is Ireland’s plan for vaccinating people against Covid-19?

37 AIB plans ‘ethical’ sale of up to 650 distressed mortgages

39 Ireland’s vaccine rollout: Can we stay at the top of the EU league table?

40 TD calls for ‘serious scrutiny’ of Leave.EU group that relocated to Waterford