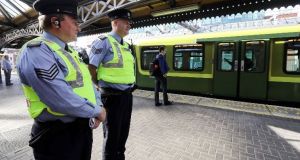 Gardaí are patrolling public transport and maintaining a visible presence in major stations on Friday but have been warned “token” efforts will not stop antisocial behaviour and violence on the network.

The initiative, named Operation Twintrack, will see up to 50 members of the force travel on Dart, Luas and commuter rail services in the greater Dublin area, and manning major train stations around the country.

They say the move could be the first in a series and follows engagement with transport operators on ensuring a safe travelling environment.

Although it has not been linked to recent incidents on the capital’s transport network, serious concerns have been raised about the safety of transport sector workers following attacks and antisocial behaviour.

Last month, the National Bus and Rail Union (NBRU) warned that bus and rail services could be withdrawn from what it described as “particular black spots” from October 14th.

“The level of antisocial behaviour and downright thuggery across our public transport system has reached epidemic proportions. We simply cannot, we simply will not, stand idly by and allow it to continue unchecked,” NBRU general secretary Dermot O’Leary told a recent conference.

The union has sought the creation of a dedicated transport police service and said assaults on Irish rail staff had risen from 280 in 2013 to almost 900 last year.

When asked why Operation Twintrack was brought into effect, gardaí said it was the result of engagement with Iarnród Éireann, Luas operator Transdev and other members of the Rail Safety Advisory Council “to support transport operators in ensuring a safe and secure travelling environment for customers”.

In a statement responding to Friday’s operation, the NBRU welcomed the high visibility move but warned “tokenism” would not be enough to solve the problem.

“Unfortunately the advertising of this initiative is akin to witnessing motorists flashing headlights to warn of a speed van up ahead; those elements that cause trouble on public transport will take a sabbatical from their antisocial behaviour today, but will reappear tomorrow when the gardaí have left,” Mr O’Leary said.

He reiterated earlier warnings that the continued provision of buses and trains is at risk in certain areas.

Friday’s garda operation began at 3pm and will continue all night. Information points have been set up at major intercity rail stations “to engage with the public and provide general crime prevention tips and assistance”, they said.