Joanne Lee (38), whose body was discovered in Ranelagh house, had been strangled

Supr Gerry Delmar speaks to the press outside a house on Ranelagh Road where the body of a woman believed to be Joanne Lee, aged 38, was found in a wardrobe by gardaí. Video: Colin Keegan/Collins Photo Agency 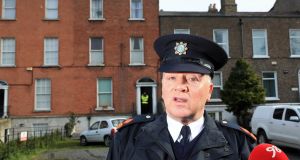 Supt Gerry Delmar speaks to the media at the scene on Friday. Photograph: Colin Keegan/Collins The body of Joanne Lee is removed from the house in Ranelagh where she was found dead. Photograph Gareth Chaney/Collins 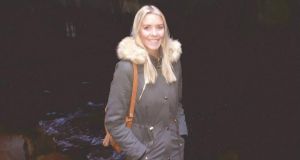 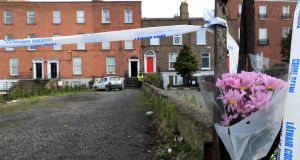 Flowers at the scene at the house on Ranelagh Road. Photograph: Colin Keegan/Collins 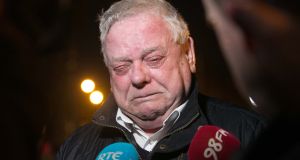 Uncle of the deceased John Curry speaking to media at the scene on Thursday. Photograph: Gareth Chaney/Collins

Gardaí have begun a murder investigation into the death of a woman whose body was found in the wardrobe of a south Dublin apartment.

A post mortem on the remains of Joanne Lee (38) has found she was strangled. Her body, with a plastic bag over her head, was found in a sleeping bag in a wardrobe in an apartment in Ranelagh on Thursday.

Her estranged husband was in the apartment when gardaí called after she was reported missing.

However, he jumped from the third floor apartment window on Ranelagh Road. He suffered serious injuries, including broken legs, when he hit the ground.

He then self harmed with a box-cutter knife. One of the gardaí who had called to the property at about 3.45pm took off some of his own clothing and fashioned a tourniquet to stem the bleeding.

The injured man was then taken by ambulance to St Vincent’s Hospital and is expected to require treatment there for a number of weeks.

Gardaí searched the apartment and found Ms Lee’s body in the wardrobe. She had been dead for at least 48 hours.

While gardaí believed she had met with foul play, it was not until the results of the post mortem became available on Friday that the investigation was upgraded to murder.

Ms Lee had previously been living with her, now estranged, husband in Garristown, Co Meath.

Neither she nor the man who was in the apartment where her body was concealed had any connection to the Ranelagh apartment.

Gardaí believe that apartment is rented and that a couple who are currently abroad had been living there.

However, in their absence the keys to their empty apartment had been passed around among a number of people.

Gardaí are unsure how the man who jumped from the apartment window came into possession of the keys.

However, he was in the apartment with the door barricaded from the inside and Ms Lee’s body in the wardrobe when gardaí arrived on Thursday.

Ms Lee had been reported missing by her estranged husband on Tuesday. A missing persons investigation was begun.

Her car was then found parked outside the building on Ranelagh Road, resulting in gardaí making door to door inquiries in their search for her.

And as they made those inquiries they came upon the apartment barricaded from the inside. They heard suspicious noises coming from it and became concerned that Ms Lee, who had a reported history of self harm, may be inside.

The gardaí on the scene decided to force their way into the apartment by breaking down the door. And as they did so the man who was inside jumped out the window.

An immediate investigation was set up at Mountjoy Garda station.

“As a result of that investigation, gardaí from Mountjoy called to this address at 92 Ranelagh Road yesterday afternoon,” Supt Delmar said.

“Inside, gardaí found a female who was unresponsive. Medical assistance was given to that female; however she was pronounced dead at the scene. We believe that the female is Joanne. However, at this stage she has not been positively identified.”

Supt Delmar said that at the rear of the premises, gardaí found a male with injuries consistent with a fall from a height.

“That male is currently in hospital receiving treatment for these injuries. I would like to appeal to anybody that last saw Joanne on the 5th of February at Garristown, Co Meath, to contact us.”

Asked about the man who had been found injured, Supt Delmar said gardaí believed he was Joanne’s estranged husband. His injuries are serious but not life-threatening.

Probably dead a number of days

He said a garda from Mountjoy had helped the man with his injuries at the scene, and “that certainly saved him, I would believe”.

Gardaí were waiting until the man was discharged from hospital to speak to him, Supt Delmar said.

Supt Delmar said Joanne had access to a car, a silver Nissan Micra 08 MH16073, and he asked that anyone who had seen her in that car contact gardaí.

The car was located at the Ranelagh address, but gardaí did not know where it had been between February 5th and the time it was found this week.

“An incident room has been set up in Donnybrook Garda station. We had the services of the State Pathologist and the Garda Technical Bureau, and we have pointed a liaison officer to deal with the family.”

Supt Delmar said the last positive sighting of Joanne had been by her family at her parents’ home in Garristown on February 5th, and he appealed for anyone who had seen her since that date to come forward.

Gardaí did not know how long Joanne had been dead, but it was “probably a matter of days” - and yet to be determined by the post mortem.

The investigation was “fluid”, and gardaí were looking at all aspects of it at this point.

Speaking at the scene on Thursday night, Ms Lee’s uncle John Curry said her family had feared the worst for her when she went missing.

He said his niece had been “a lovely girl, a beautiful girl, never any trouble”.

“I’m just devastated, the whole family is, just taken apart, just torn the soul out of us,” he said. “I just don’t know what came out of this at all, why it happened.”

Mr Curry said Ms Lee had been missing for a couple of days.

“We had a feeling something was up, but we couldn’t put it together and we were searching everywhere.

“All I can say is why, why, why take a beautiful girl, so young, so pretty, away from us all? I’m just devastated.”

Gardaí at Mountjoy had issued a public appeal for help finding Ms Lee after she was last seen on Tuesday.

Local people expressed shock at the discovery. “I came to pick my child up from nursery and was worried when I saw the Garda cars and tape around the house,” said one woman, who asked not to be named.

“It’s a quiet area round here and the house where it happened is just a couple of doors down from the crèche so it’s quite frightening to think something like that would happen so nearby. A lot of the parents and people around here are just in total shock.”