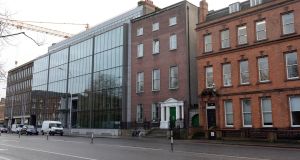 Gardaí have arrested three people following the discovery of a firearm in a homeless hostel on St Stephen’s Green.

Multiple armed and uniformed units were involved in the operation at Loreto Hall, beside the Department of Foreign Affairs, after gardaí received information about a suspected firearm on the premises.

Shortly after 12pm on Tuesday, detectives from Pearse Street Garda Station, supported by the Armed Support Unit and local gardaí, conducted a search of the hostel and located the weapon about half an hour later.

Three men, two in their 20s and one in his 30s, were arrested on suspicion of weapons possession and are currently undergoing questioning at Pearse Street Garda Station. A Garda spokesman said investigations are ongoing.

1 ‘It was pitch black’ - Rescued teenager describes night afloat with her cousin in Galway Bay
2 A million trees, including 400,000 oaks, to be destroyed this week
3 Aaron Brady, the man who said with pride he was a cop killer
4 Inside the O’Brien Fine Foods factory in lockdown Kildare
5 Schools urged not to demand clean uniforms each day
Real news has value SUBSCRIBE