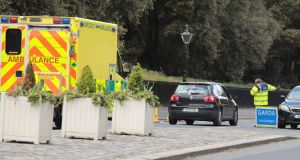 A Garda checkpoint at the entrance to Phoenix Park in Dublin last week. Photograph: Collins

Gardaí used Covid-19 policing powers 49 times in the week up to May 16th while officers used spit-hoods 10 times in that period.

The level of enforcement activity over the last week is broadly in line with, or lower than, patterns over the previous week, according to the latest information released by the Garda.

In total, gardaí have enforced the new emergency movement restrictions against 241 people since they came in on April 8th while spit-hoods have been used on suspects 57 times.

In the week to May 16th, some 49 people were either arrested or their details were taken by gardaí pending further action. All of those incidents were over allegations of being more than 5km from home without a valid reason, including for essential or emergency tasks. In the week to Saturday, spit-hoods were used 10 times, down from 19 the previous week. Spit-hoods are mesh face and head coverings to prevent suspects from spitting at gardaí.

The Garda also reported a total of 70 incidents during which members were deliberately spat or coughed at by suspects, an increase of six incidents in the week-long period to Saturday.

Garda Commissioner Drew Harris said: “Regrettably, these reprehensible spitting and coughing attacks on our personnel continue,” he said. “These are a significant health and safety risk to our members in the current environment. We must protect them from such attacks.”

Mr Harris said the force was continuing to use enforcement as a last resort. He added the vast majority of the people Garda members had met on their duties were compliant.

He said during each phase of the easing of restrictions the Garda’s approach would not change. We were now in a “critical phase” and it was crucial members of the public continued to adhere to the restrictions that were still in place, he said.

The latest update of the Garda operation also revealed that a significant number of breaches of long-standing laws were detected at Garda checkpoints nationwide since April 8th, with some 1,612 breaches detected.

These included disqualified drivers found behind the wheel, people found to be drink-driving and others committing public order crimes or drugs and weapons offences.

Mr Harris noted that the number of breaches of long-standing legislation was far higher than the number of incidents in which people were found in breach of the new Covid-19 measures.

Three weeks ago Mr Harris revealed there had been 76 people arrested or against whom a criminal process had begun, without the need to arrest them, under the Covid-19 operation to April 25th. That had increased to 139 arrests in the period to May 2nd, increased further to 192 to May 8th and has now risen to 241 uses of the powers to May 16th.

The Garda has also processed some 24,000 vetting applications for those applying for Covid19-related volunteer, medical and health roles. The turnaround time for vetting was one day and there was no vetting backlog.